by the Editors of Publications International, Ltd. & Laurie L. Dove
Prev NEXT
10 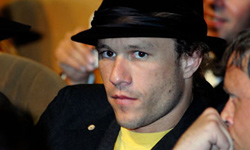 Heath Ledger made a name for himself as a quick-witted heartthrob in "10 Things I Hate About You" and "A Knight's Tale" before moving on to more dramatic roles in iconic movies that included "Brokeback Mountain" and the second installment of Christopher Nolan's Batman movie series, "The Dark Knight."

While Ledger was filming "The Dark Knight," he said in interviews that the scary role of the Joker contributed to his prescription drug use -- he often became so immersed in the characters he played that it affected his daily life, making sleep difficult. Shortly after "The Dark Knight" wrapped, Ledger began filming "The Imaginarium of Dr. Parnassus" with director Terry Gilliam. In January 2008, with just a third of the movie filmed, Ledger went to bed in his apartment in New York City's tony SoHo district, where his housekeeper later found him dead [source: Altman]. An autopsy revealed that Ledger died after an accidental and gradual overdose on a combination of painkillers, sleeping pills and other prescription drugs, leading some to speculate that playing the Joker led to his death [source: Leonard].

Ledger's grieving Hollywood family came together to save "Imaginarium." With some minor script changes, Gilliam brought on Johnny Depp, Jude Law and Colin Farrell, three of Ledger's closest friends, to portray facets of Ledger's character in his remaining scenes. Combined with a near-identical body double, a few tricks that Gilliam isn't revealing and several happy coincidences, their performances gave the film the chance to live -- and to honor Ledger's memory [source: Morgan]. The end credits proclaimed it "A Film from Heath Ledger and Friends" [source: Paris].