by Akweli Parker
Prev NEXT
3 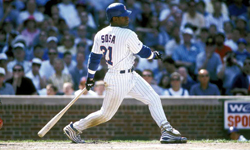 Major League Baseball has rules to make sure the game doesn't become an arms race of ever-bigger and badder bats. The idea is to keep the game as much as possible about the (drug-free) players, rather than the equipment. Specifically, all bats for use in MLB games must be made of solid wood, not metal, which would cause a ball to travel farther when hit. Some players attempt to get around the rules governing bats by messing with the bats' insides.

For instance, a lighter bat, say, one with a material less dense than solid wood, would allow a batsman to swing faster. A faster swing means more time to react to pitches headed your way at close to 100 miles per hour (161 kilometers per hour). But what if someone were to drill out the heavy wood center from a regulation bat, insert a plug of made of lightweight cork, then masterfully seal the top of the bat so no one could tell it was tampered with? From a physics standpoint, it probably wouldn't help the person hit much farther, if at all. Force equals mass times acceleration, and by reducing the bat's mass, you take away a major ingredient for hitting screamers into the stands and beyond. Right?

Well, on the other hand, the faster swing and increased reaction time could help you optimize your swing and make better contact -- which may explain why players still use corked bats, despite their forbidden status in the eyes of MLB [source: Porter].

Home run hero Sammy Sosa was infamously nabbed in 2003 with a corked bat during a regulation game against the Tampa Bay Devil Rays. Such incidents are almost impossible to explain away, given the way the evidence reveals itself -- by exploding all over home plate. For his part, Sosa said use of the illegal lumber was an honest mistake -- he said he picked up a bat intended for use only in practice and exhibitions [source: Associated Press/USA Today].