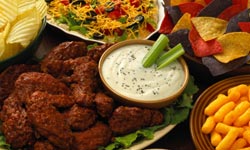 Besides watching football, having the perfect menu is an important part of Super Bowl Sunday.
JupiterImages/liquidlibrary/Thinkstock

The rest of the world may go nuts over a sport they like to call "football" (known here in the U.S. as soccer), but Americans know which one is the real deal. It's so special to us, in fact, that we've given it its own holiday -- Super Bowl Sunday. On this exciting winter day, when the respective champion teams of the American Football Conference and the National Football Conference meet in a collision of helmets, shoulder pads, mouth guards and cleats, football faithfuls and casual viewers alike set aside time to eat special foods (wings), wear special clothes (jerseys) and gather with friends and family in an annual festivity.

The Super Bowl is so popular that it has garnered more viewers than any other televised event [source: NY Daily News]. So it's no surprise that many people plan parties around such a celebratory occasion. If you're like so many other Americans who intend to host a Super Bowl party, you might want some inspiration on how to make yours memorable. On the following pages, we'll give you tips on how to throw a standout Super Bowl party.

When it comes to food, Super Bowl Sunday is second only to Thanksgiving as a day set aside for indulging and splurging [source: USDA]. But, of course, the Super Bowl calls for much more casual dining -- paper plates and napkins instead of linens and fine china. And rather than gathering around a dining room table, you and your guests will probably be perched over coffee tables and TV trays in the family room. You certainly don't want to slave in the kitchen for this event as you would for other holidays, so make it a chance to get your guests to carry some of the culinary burden by having a potluck party.

Potluck means each guest brings a dish that all of the other partygoers will share. But don't worry; there'll be no casseroles and macaroni salads on this day. A proper Super Bowl spread will involve only the heartiest of foods: ribs, wings, hoagies and chili. So, have each guest bring his or her favorite football food or snack. To ensure you don't have two or more people bringing the same dish, encourage your guests to sign up for a certain food beforehand. And keep in mind that some guests may need to prepare or warm up their food at your house to make sure it's fresh for the big game.

Go back in time for our next Super Bowl party theme.

The Ghosts of Super Bowls Past

Super Bowl parties always have a variety of guests. Some are hardcore football fans, others are just caught up in the spirit of the day, and then there are those who'd really rather be watching Puppy Bowl on Animal Planet. If most of your guests fall into the first category -- and maybe even the second one -- they'll really appreciate this theme. It will allow them to relive the great games and players of Super Bowls gone by.

To capture the Ghosts of Super Bowls Past theme, decorate your party areas with vintage football memorabilia or blown-up posters of famous Super Bowl game scenes from throughout the years.

And don't forget to get your guests in on the theme. Ask partygoers to wear jerseys or apparel that represent their favorite game or player. You might even make it a bit of a costume party, having the guests also dress appropriate to the era of their selected game. For example, if a guest is wearing a Terry Bradshaw or Lynn Swann jersey, he or she might also get into the spirit of 1976's Super Bowl X by wearing bellbottoms and a headband.

You'll be surprised at the great conversations this theme will bring up!

Our next party idea will have your guests taking sides.

Would it be the first Super Bowl -- the 1967 matchup between the Green Bay Packers and Kansas City Chiefs that led to the merging of two football conferences and helped make Coach Vince Lombardi a football icon? Or would it be the more recent competition between the New England Patriots and the Carolina Panthers in Super Bowl XXXVIII, which is now known less for having the highest-scoring quarter in Super Bowl history than it is for a certain wardrobe malfunction at halftime? Choose the games that are memorable to you and your guests, and you can't go wrong.

Let's face it, people like to take sides: Republicans vs. Democrats, Coke vs. Pepsi, dogs vs. cats. But there is nothing that brings out the competitive spirit more than sports. Unless all of your guests are rooting for the same team, take advantage of the competitive mood and incorporate it into your Super Bowl party's theme.

Start by asking your guests to wear clothing that represents the team they're pulling for. They can wear jerseys, team sweatshirts or just the colors of their team. You can also encourage them to embellish their look with face paint. Next, you can supply your guests with cheering accessories like pom-poms and foam fingers. Finally, you'll want to keep the two sets of fans on separate sides of the room. Decorate each side with hand-made posters supporting the team of that side's fans. You might want to leave out markers and blank poster board for your partygoers to make their own signs. Ideally, your guests will get into the spirit of the competition, with each side coordinating their own cheers and trash talk -- maybe even the wave.

If you plan this party well and have a lot of spirited guests, you can expect a boisterous evening.

Our next tip will show you a unique way to incorporate a specific team into your party's theme.

Everyone wants to pull for the hometown team, but when they're not available, we sometimes fall in the corner of a nearby or regional team (unless, of course, they're a rival). Regardless of your reasons for supporting a particular ballclub, you can still have some fun with team locations on Super Bowl Sunday.

If you're a Dallas Cowboys fan and they make it to the championship game, why not throw a party with a country and western theme? Play plenty of country music pre-game and decorate with Texas flair. Want the New Orleans Saints to make it all the way again -- or you're just a fan of the Big Easy? Have a Mardi Gras-themed party. Food can also factor easily into the motif. The Green Bay Packers are playing? Serve bratwursts and plenty of Wisconsin cheeses and beers. The Buffalo Bills? Offer several varieties of buffalo wings. The Chicago Bears? Deep-dish pizza, for sure.

And you don't just have to take your destination inspiration from the teams that are playing. You can build your theme around the city that's hosting the Super Bowl on the year of your party. If it's in Miami, try out a Cuban-themed party. Atlanta? Go all out with a Southern theme, complete with fried chicken and peach cobbler. You'll soon find that designing your party's theme around a city or region can equal lots of fun and creativity.

The first Super Bowl game took place in Los Angeles. The city that has hosted the most Super Bowls is Miami

If you've ever been tailgating, you know it's an atmosphere that's hard to replicate inside a living room or den: the building excitement for the big game, the smell of burgers and hot dogs on the grill, footballs being tossed overhead, people-watching and socializing with friends. So if tailgating is your preferred way to party before the big game -- but you aren't able to make it to the stadium lot of the Super Bowl -- why not organize a tailgating party in your own neighborhood? Assuming the weather allows it.

The setup for this kind of party is about as easy as it gets: Simply set up a grill and some lawn chairs in your driveway and coordinate with other families on your block to do the same. Feel free to add some music and football or team décor for atmosphere, as well as footballs for kids (and adults) to toss around. The more people in your neighborhood who participate, the more of a tailgating environment you'll create.

And if you want to keep the community togetherness going throughout the evening, move the party to a neighborhood clubhouse or community center for the big game. You may not be seeing the Super Bowl in person, but you'll enjoy it with a rowdy crowd of friends.

Want to know more about football and the Super Bowl? Keep reading for lots more information. 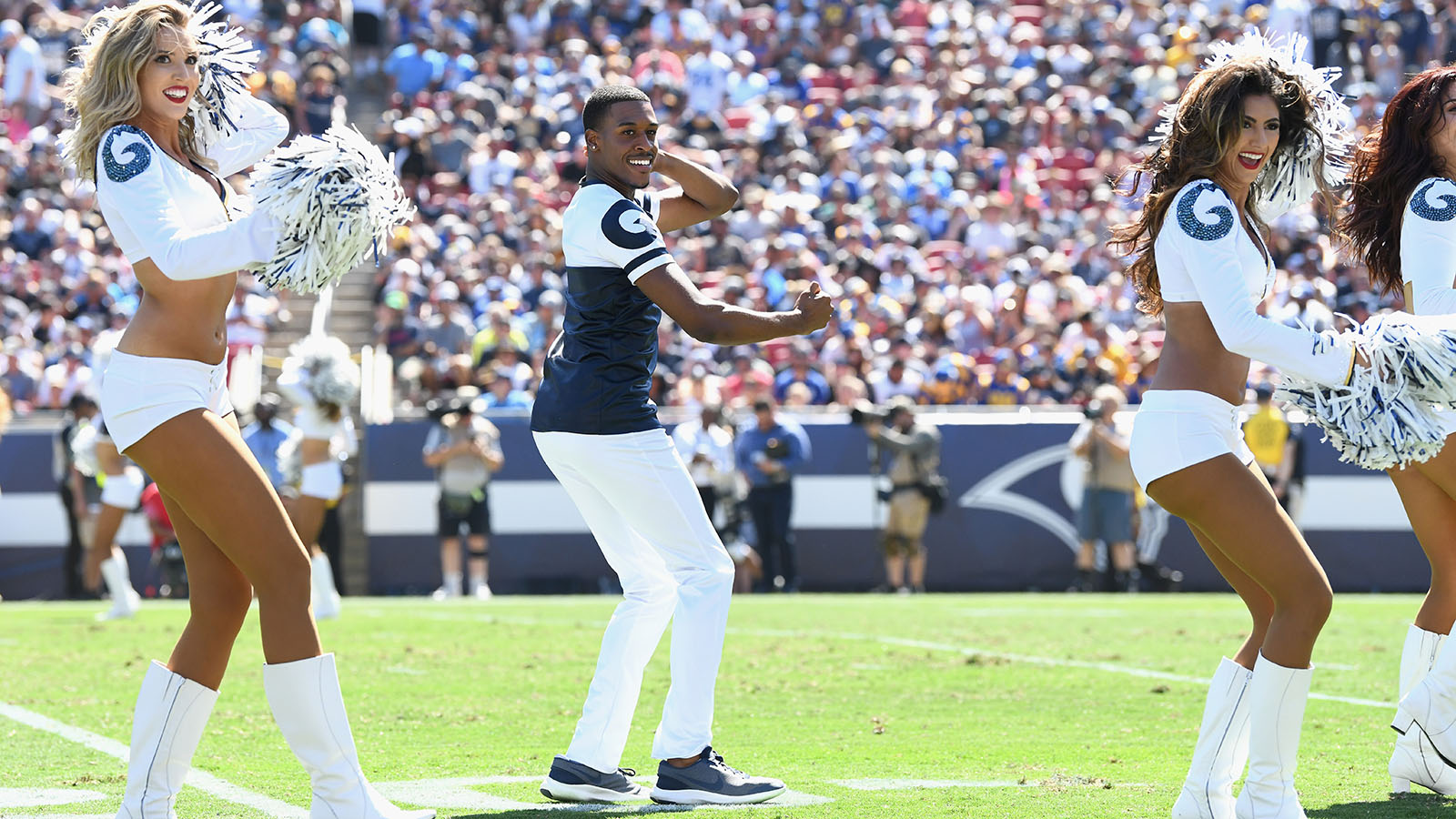 For the first time ever, men will be cheering professionally at the Super Bowl. HowStuffWorks looks at why they've made the change.