Browse the article 5 Strategies for a Better Baseball Game 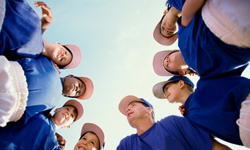 Take me out to ballgame -- sure, but how do I win once I get there?

Baseball is famously known as a game within a game. For every game, there's an inning to win. For every inning, there are at least three at-bats from each side. And every time the ball is pitched, there's a little battle between the hitter, the pitcher and the players in the field.

With all these games going on at once, it's no wonder that baseball "strategies" are numerous -- and easily dismissed. What works for a player might not be beneficial to the team as a whole (trying to stretch a double into a triple when you're behind), and what's best for a team might actually hurt a player's numbers (a sacrifice bunt to advance a runner).

So let's huddle up and figure out a few ways (not foolproof, but some good bets) to improve your baseball play. Game on.

Adapt and Be Flexible

There's a reason that major leaguers have a bevy of coaches, trainers and professionals mulling around them during every batting practice and pitching warm-up. Athletes are not finely tuned machines that can perform every day like robots. Just like anyone else, certain skills weaken and must be built up, while unexpected strengths can also be harnessed.

And while it isn't groundbreaking or even terribly interesting, the truth is pretty obvious: keep practicing. It's continual honing of your game that will make you a more capable player. Take a page from major leaguers: Even if they were able to maintain a consistent level of play and skill, the game changes around them. A pitcher goes at them with a knuckleball, or the old-time sluggers are replaced with quick hitters that slap a ball infield to get on base.

Beyond strengthening skills or changing routines, remember that your body changes and small modifications in stance or throwing need to be addressed and corrected as you age. Consult with a coach or someone with professional training to pinpoint any tweaks you can make to improve your game.

Be (or Become) a Leftie 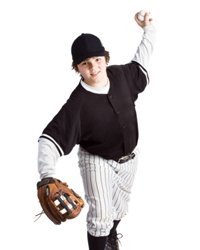 Lefties and ambidextrous folks are valuable members of any baseball team.
Jupiterimages/@Getty Images/Thinkstock

True, it helps to be born with a natural proclivity toward the southpaw. But if you really want to improve your game, switch hitters and throwers -- or just lefties in general -- are a valued commodity. Consider that while one in 10 people are left handed in the general population, upward of 25 percent of baseball players are predominant lefties [source: Newsweek].

Why are lefties so sought out for batting? One reason is shockingly simple: When facing the pitcher, they're on the right side of the base, which means they're a few steps closer to making it to first. They also aren't looking over their shoulder when batting against a right-handed pitcher, which some argue can help them see the ball with better depth perception.

And why are left-handed pitchers needed? For one, simply because they're rare. Most hitters are used to righty pitchers, and for players overly sensitive to being "off" their game, facing a southpaw can be intimidating. Also, many batters maintain that a lefty pitch comes at a different angle, adding to the confusion.

So teach yourself to be a switch hitter or pitcher, and you'll double your value to a team.

It makes sense to be an expert on your position in baseball; every position, after all, has a specific purpose and a way it's most effectively played. But what's even more useful than being the master of your baseball domain? Being a master of many domains in baseball.

A person who can play several positions -- called a utility player -- can be a great strategy to ratchet up your game. Not only is learning the nuance of each position useful in offense, it's also a way to understand the weakness of each position when you're hitting.

Even major leaguers will often try to extend a career by switching positions or acting as a kind of "fill-in" utility player when the lineup demands it. A once-sharp (or perhaps simply acceptable) first baseman who isn't so fast on his feet but can still hit the ball over the fence might just be a great designated hitter in his golden years. Managers love having a player that they can sub into almost any role. If you've got someone who can fill third, right field and first on any given day, it's like adding three players to the roster.

So while you should never slack off on practicing the position you love or that comes naturally to you, allow yourself to rotate. You might improve your game.

Keep Your Head in the Game 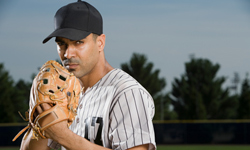 Hone your mental game, and you're halfway there.
Image source/Thinkstock

It's said so often it seems like a cliché that can be ignored, but it's true: The mental game in sports is half the battle. Keeping yourself sharp psychologically might not improve hand/eye coordination or make your slider dip, but that doesn't mean it won't have a measurable effect on your game.

Consider the case of Chuck Knoblauch, a Yankee's second baseman, who suddenly developed what's known in baseball as a case of the "yips." For those unfamiliar, "the yips" is a term applied to many different sports, and it basically means one loses the ability to effectively play the sport. In Knoblauch's case, it meant he suddenly couldn't make a throw to first base. (Rather important for a second baseman.) Rick Ankiel and Steve Blass are also examples of Major Leaguers affected by the yips. Ankiel, a pitcher, had to become an outfielder to break the spell, and Blass left baseball.

Clearly, the psychology of baseball is no laughing matter. Using mental rehearsals and teaching yourself to control your focus is imperative to making a baseball player game-ready. So-called "smart" players -- those who have a crisp mental image of the most effective play or strategy to win the game -- are a lot more highly valued than the image of big, dumb animal sluggers that used to pervade the game.

Get Yourself on Base

Ok, it's true: the old "Moneyball" trick of keeping a high on-base percentage has been hemmed and hawed over. And while just trying to get runners on base (without being obsessed with batting average or the "physicality" of a player) is still debated in major league organizations, it is probably a great strategy for the average Joe or Jane looking to improve their intramural parks and recreation game.

The theory is simply this: Instead of getting the biggest hit you can, just try to get on base. Period. A slap shot single, a walk, even being hit by a pitch? All fair game to getting runners in scoring position. While it might not do awesome things for your batting average, it just might add a few numbers to the scoreboard.

Now, this strategy is especially controversial because it rewards quick base runners above, say, sluggers who might hit 28 home runs a year but strike out 1 out of 3 times. But the theory is that a person who can get on first base, steal second and then be brought home by another player's fielder's choice single will make just as much of an impact. (The added bonus in major league games is that the guy who hits 28 home runs a year is going to be a lot more expensive.)

So now that you've got some strategies set, let's go to the next page where we can play ball with lots more information.