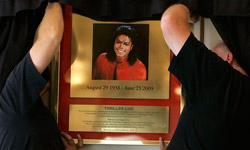 Michael Jackson, known as the King of Pop and beloved by millions, was found unconscious and not breathing in his bed at his home in California on June 25, 2009, and was later pronounced dead at UCLA Medical Center. According to the coroner's report, Jackson died of heart failure. The report, though, leaves some questions unanswered while raising others. Here, we'll look at five questions that still linger more than a year after his sudden death.

Why did the coroner's office perform two autopsies?

A coroner performs autopsies to figure out why and how a person died. They aren't performed on everyone. They're done to determine the cause of death when an otherwise healthy person dies unexpectedly. Immediate family members can also request one.

Michael Jackson's body underwent two autopsies: the first to determine why a seemingly healthy Jackson suffered cardiac failure and the second at the request of his family.

Let's look at the timeline of events:

The coroner's office released a report on Aug. 19, 2009, which determined Jackson died of acute propofol intoxication (an overdose of the anesthetic propofol), combined with other sedatives in his system.

What drugs were in Michael Jackson's body at the time of his death? 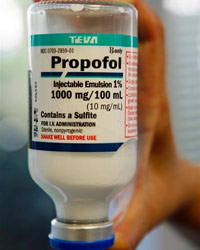 Teva Pharmaceutical Industries Ltd. said Friday May 28, 2010, it will stop making its sedative propofol, which became infamous when it was linked to the death of Michael Jackson.
AP Photo/Richard Vogel

During his autopsy, several drugs were found in Jackson's system, including the following list of sedatives and other prescription drugs:

Propofol is a powerful sedative used by anesthesiologists on patients undergoing surgery in a hospital setting. Well regarded for its quick and deep sedation -- it works in about 40 seconds -- during surgery, propofol is an unpredictable drug that's currently only approved by the Food and Drug Administration (FDA) to be administered by health professionals trained in anesthesiology. Jackson did not have a prescription for propofol, and bottles without patient or doctor names -- and without dosage directions -- were found at the scene.

Many of the other drugs in Jackson's system were benzodiazepines: lorazepam, midazolam, diazepam (known to most of us as Valium) and nordiazepam. Doctors commonly prescribe these drugs to treat anxiety and to induce sleep or sedation. Lidocaine is a local anesthetic.

In addition to the drugs found in Jackson's system, the following drugs were found at the scene of his death:

How much did Michael Jackson actually transform his appearance?

There's no shortage of rumors about Michael Jackson's plastic surgery. Exactly how much he had is unknown, but we do know he had at least two nose jobs -- he admitted to those. Doctors who treated him said that Jackson had cheek implants, eyelid surgery and a cleft added to his chin.

According to the autopsy report, Michael Jackson also had tattoos. His tattoos were permanent makeup, not a tribute to mom or military service. Jackson had dark tattoos to enhance his eyebrows, his lips and his hairline (along the front half of his scalp), as well as permanent eyeliner.

His hair, too, was enhanced. His natural hair was sparse, and naturally short and curly. The Michael Jackson we saw in the most recent years had long, straight locks -- as it turns out, Jackson's own thinning hair was connected to a wig.

What factors contributed to Jackson's death?

During the autopsy, doctors discovered that Michael Jackson had diminished lung function due to chronic lung inflammation and a condition called respiratory bronchiolitis, a lung disease commonly seen in smokers. Why is this important to his death, when it wasn't the cause?

Propofol is an anesthetic and sedative, and those qualities have an impact on our lungs and heart -- its sedative properties reduce lung function. The benzodiazepines found in his blood at the time of his death also have a sedative effect.

While the autopsy report is clear that Jackson's impaired lung function didn't cause his death, it would have put him at a greater risk of respiratory and cardiac-related complications while under sedation.

For years, the public speculated whether or not Michael Jackson really suffered from vitiligo or if he bleached his skin. According to his autopsy report, Jackson did suffer from the condition. Vitiligo robs the skin of its color, leaving it white or lighter than surrounding skin tone. It's an autoimmune disorder that causes the body to destroy melanin-producing cells, which give skin its pigment.

Was Michael Jackson's death a homicide?

According to the autopsy report, yes, Michael Jackson's death is considered a homicide, and Dr. Conrad Murray, Jackson's private physician, is being charged with involuntary manslaughter.

Here's how the determination breaks down.

First, based on the results of the autopsy, the coroner couldn't determine a medical need for propofol to be administered to Jackson. It was then determined that the propofol was injected by someone other than Jackson himself, which rules out suicide.

Additionally, the manner in which the propofol was administered was questionable: The doctor who injected Jackson with the drug didn't follow the proper procedures. The physician, Murray, treated Jackson in Jackson's home rather than in a hospital setting. There was no equipment for monitoring Jackson while he was under the influence of the drug, no equipment to resuscitate him if there was a problem during his sedation and no supplies to ensure the proper dosage was administered.