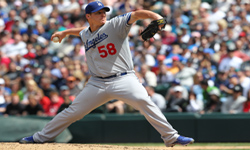 A routine pitch like this would have been shocking a century ago.
Otto Gruele Jr./Getty Images

Here's an interesting trivia tidbit for you, courtesy of David Nemec, one of the foremost baseball historians and chroniclers of the sport: Major League pitchers don't have to throw overhand [source: Nemec]. There is absolutely nothing in the rule book that imposes any restrictions on how a pitcher can pitch, other than the bans on spit balls, scuffs and all that "balk" business. If a pitcher was curious, he could loft a few toward the plate in a "granny"-style underhand arc, but he might get discouraged after the fifth or sixth consecutive home run.

Underhand pitching, in fact, used to be the only game in town. As we mentioned on the previous page, the early days of baseball were a hitter's paradise. The pitcher's role was simply to toss the ball into play. The real game was between the hitter and the fielders [source:James]. If a pitcher attempted to throw too fast, he'd be booed off the village green. Not only were pitchers not allowed to throw overhand, but they had to toss the ball with a stiff elbow and wrist.

It wasn't until 1884 that the National League voted to lift the ban on overhand pitching. The American League allowed pitchers to use a modified sidearm in 1884, as long as their hand didn't raise above the shoulder during release, but then lifted all restrictions on pitching in 1885 [source: Baseball Almanac].