by Gerlinda Grimes
Prev NEXT
3

The Curse of the Black Sox 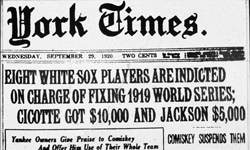 In 1919, bitter over salary disputes, eight White Sox players put their heads together and figured out a way to get the money they felt was their due. The scheme they concocted resulted in one of the biggest scandals in baseball history.

As ringleader Arnold "Chick" Gandil confessed in a 1959 Sports Illustrated article, he was approached by two men, "Sport" Sullivan and Arnold Rothstein, who proposed a conspiracy to throw the 1919 World Series. Soon, another gambler, Bill Burns, got wind of the deal and said he'd top their offer. Rather than choose between the two deals, eight greedy White Sox conspirators decided to cash in from both parties. Earnest money was exchanged, and the deal was sealed.

Before they could throw the series, however, reporters started sniffing around. Conspiracy rumors ran rampant and several players got cold feet. In his article, Chick admitted to the scheme, as well as to the fact that the players accepted $10,000 in earnest money, but he maintained that the Sox didn't actually throw the game. Ultimately, the eight players were put on trial and found to be innocent. However, they were banned from baseball for life, and for the next 86 years, the team known as the White Sox suffered the curse of the Black Sox. The curse was finally laid to rest in 2005 when the White Sox won the World Series.

Unlike the curse of the Black Sox, our top two most legendary baseball curses of all time remain unbroken.