by Gerlinda Grimes
Prev NEXT
1

The Curse of the Billy Goat 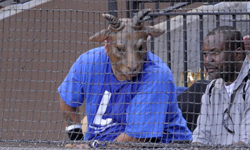 A White Sox fan pokes fun at the Cubs' legendary curse during a game between the two Chicago teams in 2009.
Ron Vesely/Sport/Getty Images

In the early days of baseball, the Chicago Cubs were prizewinners. They took home the World Series title in both 1907 and 1908. In 1916, wealthy industrialist William Wrigley bought the team and hired upstart sports writer William Veeck to help him run it. Under the guidance of the "double Bills," the Cubs won the National League pennant four times.

The team had a few fallow years following their 1938 pennant win, but nothing that elicited whispers about a curse. Then, in 1945, William "Billy Goat" Sianis tried to bring his pet goat, Murphy, into Wrigley Field for game four of the World Series. Sianis and Murphy enjoyed the game until owner P.K. Wrigley, who had inherited the Cubs from his father William, ejected them from the stadium claiming that the goat smelled. Incensed, Billy Goat Sianis left the field muttering a curse on the team. Since then, it's been downhill for the Cubs.

In 1969, the Cubs had all but cinched the pennant and a shot at the World Series when, in a crucial moment, a black cat streaked across the field. Not only did the Cubs lose that race, they also choked in 1984, 1989 and 2003. In fact, the Cubs are currently suffering from the longest championship drought in all of American sports history. It doesn't get much more cursed than that! But that could finally change this year when the Cubs face the Indians.

Fans can be pretty rabid about their sports teams. The next time you're tempted to place a curse on your favorite team, remember the curse of the Billy Goat and think twice about where you aim your evil eye!