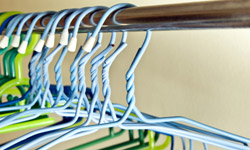 Even if the scandal was fabricated, the legacy of "Mommie Dearest" lives on. We still think twice before using wire hangers with high-quality clothes.
iStockphoto/Thinkstock

In the 21st century, the age of Internet gossip and reality television, you can find a celebrity tell-all anywhere. However, this wasn't always the case. In 1978, Christina Crawford's exposé of her mother, the actress Joan Crawford, rang in the era of the scandalous celebrity scoop.

Joan adopted the infant Christina in 1939, but what began as a loving relationship began to sour as Christina grew. Joan reportedly began to assert her dominance over Christina and was reluctant to accept the fact that her daughter was growing up [source: Goulding]. Christina's teen years were tumultuous for the pair, but the final straw came when she decided to pursue her dream of acting. When she was forced to leave the cast of the soap opera "The Secret Storm" for a surgery in 1968, Joan took her place. Christina never forgave her mother for that, and the two became estranged. Joan died in 1977; a year and a half later, Christina published "Mommie Dearest."

The book was the first of its kind, and its claims that Joan was a self-involved, callous and abusive mother caught the media's attention immediately. The book's film adaptation, starring Faye Dunaway, was renowned for its campiness but still fueled the public's altering opinion of Joan.

Despite the immense popularity of "Mommie Dearest," those who knew Joan personally contested its veracity. Actors Van Johnson and Myrna Loy both publicly came to Joan's defense, as did Christina's sisters Cathy and Cindy. What was indisputable, however, was that "Mommie Dearest" paved the way for an era of celebrity tell-alls [source: Chandler].