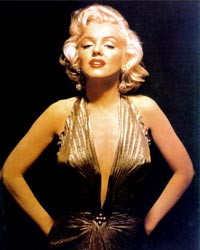 Where there's power there's scandal, and the White House is no stranger to either. In the early 1960s, with the United States' most dashing President in the White House, it was only a matter of time before Marilyn Monroe, Hollywood's most glamorous starlet, found her way to Washington.

It began in February of 1962, when Monroe was invited to a dinner party held in Kennedy's honor. This wasn't the first time they'd met, and in their previous encounters, observers had noticed their flirtatiousness. But this time, Kennedy asked for her phone number. He called the next day to invite her to his home in Palm Springs, Calif.; conveniently, First Lady Jackie would be absent.

Though the Secret Service worked to conceal evidence of their meetings, rumors swirled following that California weekend. Kennedy was a ladies' man known for his extramarital dalliances, and other guests observed that "it was obvious that they were intimate and that they were staying there together for the night" [source: Taraborrelli].

But this meeting of Hollywood and political royalty had less than a fairy-tale ending. Monroe's troubled childhood had left her emotionally and psychologically vulnerable, and she reportedly fell for Kennedy far more deeply than he did for her. His waning interest in her coincided with a series of other disappointments, and she sank into alcohol and drug abuse. On Aug. 4, 1962, she died alone in her home of a drug overdose. Her death was ruled a probable suicide [source: Doll].