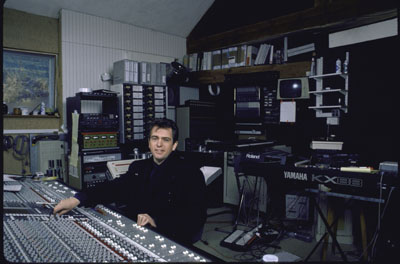 Home recording studios don't have to be as elaborate as that of Peter Gabriel's.
© Peter Jordan/Time Life Pictures/Getty Images

With the right equipment and a surprisingly small amount of money you can build a professional quality recording studio in your own home.

Here are the five basic tools that every home studio needs:

For a perfectly good digital recording device, look no further than your computer. Your built-in sound card will probably work fine, but if you're serious about home recording, you should consider investing in a sound card made exclusively for that purpose, with a high-quality digital audio converter (DAC), microphone pre-amps and MIDI input/output.

To record music on your computer, you'll also need sequencing software. This is software that records either analog audio from a microphone or MIDI data from electronic instruments. Sequencing software allows you to easily edit and mix multiple tracks, add effects, export audio files to CD. The industry standard for professional audio sequencing is Pro Tools (comes with its own sound card), but there are options for every budget.

Computers are such versatile and powerful home recording devices that almost everybody chooses this option. However, if you're a firm believer that computers and music don't mix, you can buy a multi-track digital recording device that records onto a compact Flash card or even burns directly to a CD.

Don't skimp on your microphone. Even with all of the magic of digital editing and effects, you can't do much with a bad source recording. The best kind of microphone for recording solo acoustic instruments and vocals is a condenser microphone. For vocals, you'll also want a pop filter, an inexpensive piece of material that protects the mic from hard "p" and sharp "s" sounds.

Monitor speakers are different than normal stereo speakers. They're important in a recording studio environment because they broadcast the audio exactly as it's being recorded, without "coloring" or "sweetening" the sound [source: BBC]. This is the best way to ensure that your recording will sound exactly how it did when you were playing it.

It's common to record songs in a multi-track format, recording each track one by one (drums first, bass second, keyboards third, et cetera). The best way to do this is to use a pair of headphones to listen to the previously recorded tracks as you lay down a new one. Good headphones keep the sound in, so the only thing that's recorded is the new track.

4. A MIDI controller or synthesizer

A synthesizer is typically an electronic keyboard that can be programmed to play many different kinds of sounds. But synthesizers come in many different shapes and sizes, such as guitar synths, wind instrument synths and drum machines.

An audio interface is like an external sound card. Instead of plugging microphones and digital instruments directly into your computer, you plug them into this external box that connects to your computer with a single cord, either USB or Firewire. The interface handles the analog-to-digital conversion, taking pressure off your computer's processing power. This is especially useful for laptops, which don't have space for extra internal PCI cards and generally have slower processors.

Audio interfaces, also known as breakout boxes, come with a certain number of microphone pre-amps (anywhere from two to a dozen) and knobs to control the recording level of each microphone. Generally, each instrument and vocal needs its own microphone (drums need at least 3 separate mics), so look for an interface with enough pre-amps to cover your needs.

For lots more information about home recording and related topics, check out the links below.