by Mark Boyer
Prev NEXT
3 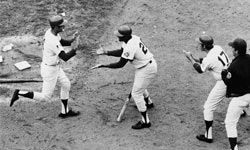 The 1969 Baltimore Orioles were a juggernaut, but they couldn't top the Miracle Mets. The Orioles roster boasted the best pitching rotation in the majors, and with sluggers like Boog Powell and Frank Robinson, its offense wasn't anything to sneeze at either. The team cruised through the regular season, winning 109 games, which was the most any team had ever won up to that point. The New York Mets, meanwhile, won an impressive 100 games in the '69 season, but they were still a young franchise (the Mets were formed in 1962). Most analysts didn't expect them to be able to match the statistical advantages enjoyed by the Orioles.

When the series began, it looked like the oddsmakers would be proven right. Baltimore pitcher Mike Cuellar smothered the Mets lineup, pitching a complete-game victory. But then the Mets' starting rotation took over the series, allowing the Orioles to score just two runs over the next three games. The Mets then won the series in dramatic fashion with a home run off of Don Clendenon's bat [source: MLB.com].

One of the biggest intangibles in any team sport is coaching, because it's difficult as spectators to know how much of an impact a coach might have on the outcome of a game. But that wasn't the case in game 5 of the 1969 World Series. In the 9th inning, Mets manager Gil Hodges managed to convince the umpires that a low pitch had hit batter Cleon Jones in the foot by retrieving the ball and showing the shoe polish on it. The very next batter, Clendenon, hit a two-run home run, winning the game and the series for the Mets [source: SI.com].