by Mark Boyer
Prev NEXT
4 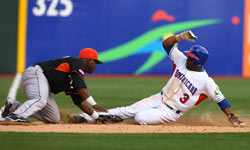 Willy Taveras of The Dominican Republic is tagged out trying to steal third base by Yurendell DeCaster of The Netherlands during the 2009 World Baseball Classic.
Al Bello/Getty Images

Although it fields the best baseball team in Europe, the Netherlands is not typically known as a baseball powerhouse. Like most of Europe, soccer (futbol) is the most popular sport in the Netherlands, and ice skating is also very popular -- but not baseball? Not so much. Most baseball fans would probably be hard-pressed to name a single Dutch ballplayer. That's why it came as such a surprise when the Dutch national team shocked the Dominican Republic in the 2009 World Baseball Classic.

One game can easily be written off as a fluke, but the thing that makes Holland's victory over the Dominican Republic such a notable upset is that they pulled it off twice in a period of four days. With a roster composed entirely of Major Leaguers, the Dominicans were considered tournament favorites in 2009. After winning the first game of the best-of-three series 3-2, the Dominicans stormed back and took the second game handily, by a score of 9-0. After such a lopsided victory, it was widely assumed that the Dominican Republic would prevail in the third game, but the Dutch team had other ideas [source: Curry].

The third and final game of the series was a low scoring affair. After nine innings, the score was still tied at zero, but things finally got interesting in the 11th, when a fielding error by Dominican Republic first baseman Willy Aybar allowed a run to score, ending the game in dramatic fashion. Sure, the Dominicans can make the excuse that Alex Rodriguez -- one of the most talented and highest-paid athletes in the world -- was injured and unable to play, but the team was still stacked with Major League All Stars. The Dutch team, meanwhile, featured just two Major Leaguers [source: AP].