Neil Walker of the Pittsburgh Pirates grimaces in pain after injuring his hand attempting to turn a double play against the Los Angeles Dodgers on Aug. 15, 2012, at PNC Park in Pittsburgh, Pa. See more Sports Pictures.
Justin K. Aller/Getty Images

You probably don't think of baseball as a dangerous sport. It's not like football, where players collide at full speed in the middle of the field, or hockey, where players swing sticks at the puck and sometimes at each other. And it's nowhere near as dangerous as boxing, where the object is to punch somebody else in the face before they can punch you. Compared to these sports, baseball seems about as dangerous stamp collecting.

But you can get seriously hurt playing baseball. Really. And most of the time it's yourself you hurt, not somebody else. With all those fast moves and straining muscles, eventually a ligament or a tendon can get torn or a muscle can get pulled. This may not sound like much compared to getting punched in the face, but when it happens it hurts and can keep a player out of the game for days or weeks at a time. And sometimes even worse things can happen.

Just about any damage that can take place to the human body can happen in baseball, from broken bones to ruptured kidneys, but the most common injuries occur over time and are often the result of repetitive stress. Just as typists know that spending too many hours drumming fingers on a keyboard can cause numbness in the wrist (called carpal tunnel syndrome), baseball pitchers know that pitching enough fastballs can cause serious problems in the shoulder. And runners who turn too quickly can do serious damage to their knees. Let's look at some of the most common injuries that occur in both professional and amateur baseball.

Erik Bedard of the Pittsburgh Pirates bends over in pain after injuring himself while pitching against the Washington Nationals during the game on May 9, 2012, at PNC Park in Pittsburgh, Pa.
Jared Wickerham/Getty Images

A good pitcher can pitch a fastball at speeds upward of 100 miles per hour (161 kilometers per hour) and when something's moving at 100 mph, you just know there's a chance someone's going to get hurt. More often than not, the person that gets hurt is the pitcher.

The rotator cuff is the set of four muscles that allow the human shoulder to, well, rotate. The shoulder can rotate into more positions than any other joint in the human body and the rotator cuff is one of the reasons why. Like other sets of muscles in the body, the rotator cuff muscles are held together by bands of connective tissue called tendons. Repetitive stress on these tendons, like using the shoulder to throw fastballs at speeds that would be illegal on most highways, can cause them to become inflamed and eventually to tear. This usually occurs over a long period of time and can be prevented by performing warming up exercises for the shoulder muscles before the serious pitching begins.

Once a tendon tears, the pitcher will experience pain and an inability to rotate the shoulder properly, both of which are bad news, especially if you make your living throwing baseballs. Fortunately, there are same-day surgical techniques that can repair the damage and medicines that can help the pain. Mostly, though, the injury just needs time to heal.

Wait a minute...isn't tennis elbow something that only tennis players can get? I mean, that's why it's called "tennis elbow," right?

Well, yes; but tennis elbow, which is an inflammation (and sometimes a tear) of the tendon that runs up the side of the arm next to the elbow, can happen to anyone who swings their elbow a lot, especially with the violent motion required to lob a tennis ball over the net -- or the throwing motion used by a baseball pitcher. The exact cause of tennis elbow isn't known, but it seems to be another repetitive stress injury caused by constant strenuous use of the arm muscles, resulting in tiny tears, cell death and increased pain when the muscle is used.

A similar condition, also suffered by pitchers, is golfer's elbow, which is an inflammation of tendons on the inside of the elbow rather than on the outside. And, yes, golfers get it too. Both can be treated with anti-inflammatory drugs, ice and, of course, rest and time.

If both rotator cuff tears and tennis elbow are pitcher's injuries, then injuries to the knee are most likely to happen to runners. An impact against the knee or a sudden twist of the joint, like the kind a baseball player makes while rounding the bases, can rip the cartilage in the meniscus and that means a lot of pain. Fortunately, meniscus injuries can heal over time, but really bad ones need some help from a surgeon.

Another way in which the knee can become injured is if the ligaments that hold the upper part of the leg to the lower leg become strained or torn. Like injuries to the meniscus, these injuries are caused by sudden changes in speed and direction while running -- and, gee, that's what baseball players are doing all the time!

Moises Alou of the San Francisco Giants dodges a wild pitch during a Spring Training Cactus League game against the Colorado Rockies on March 24, 2006, at the Scottsdale Stadium in Scottsdale, Ariz.
Jonathan Ferrey/Getty Images

Think about it. When the pitcher throws a ball toward a batter's strike zone, only a small error in aim could cause it to hit the batter's head. And remember that part about how a fastball can go over 100 miles per hour (160 kilometers per hour)? Well, just think for a moment about how fast a batted-ball can travel. Imagine what it feels like to have an object traveling that fast impact your face. It could knock your teeth out, blacken your eye or even crack your skull. Unlike players in more violent sports, such as football and rugby, unless they're at bat, baseball players don't wear any more head protection than a thin cap. So if that ball connects with your head while you're out in the field (or even on the bench), there's really nothing standing in its way.

Getting hit in the head with a ball isn't the only way to sustain a head injury in baseball. Outfielders can bump into one another, runners can collide with catchers -- the possibilities for a blow to the skull are endless. And a blow to the skull can lead to a concussion. The major symptoms of which are nausea, dizziness, headaches and confusion. Head injuries shouldn't be taken lightly and if concussion is suspected, a trip to the emergency room is in order.

Sometimes called heat stroke, this isn't an injury per se, but it can lead to one. It can even lead to death. Heat prostration is a risk in any outdoor sport, especially in warm, humid weather. Heat prostration occurs when the body isn't able to get rid of its internal heat as quickly as it builds up. Eventually, when a player's body temperature shoots over 104 degrees Fahrenheit (40 degrees Celsius), the brain itself can start to cook -- and that's a head injury even worse than concussion. Heat prostration can strike when playing baseball in temperatures over 90 degrees Fahrenheit (32.2 degrees Celsius), but there's an easy way of preventing it: Hydration. Keep putting fluids in your body, especially sports drinks like Gatorade that are designed to keep the body's electrolytes properly balanced. Signs of heat prostration include clammy skin, nausea, dizziness and excessive sweating.

If a player starts showing signs of overheating, he or she should be taken out the game and given a chance both to rest and to cool off. It's not uncommon to hear of young athletes driven by overzealous coaches to the point where their body temperatures shoot to dangerous levels. Be careful when playing sports on hot days. A rotator cuff injury will heal with time and maybe a little help from surgery, but a fried brain is forever.

I've never played sports professionally, but like most other people, I've put in my time on the baseball diamond in back of my school swinging at pitched-balls that, more often than not, I failed to hit. I can't say I was ever injured on the playing field -- actually, my worst "sports" injury came when somebody tripped me as I was running around the school gym -- but if you're somebody who takes your sports seriously, either as an amateur, a professional, or a would-be professional, you owe it to yourself to guard against serious injury. We often hear of a single injury taking an athlete out of the game for an entire season -- or worse yet, ending their career altogether. Sure, baseball isn't as rough as some other sports, but don't let that make you complacent. Any sport that involves running, jumping, high-speed balls and strenuous exercise in the hot sun has risks aplenty. Don't let that scare you away from the sheer joy of running the bases, but be sure to take every precaution you can. 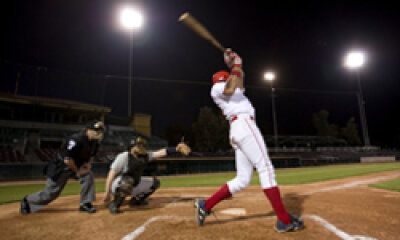 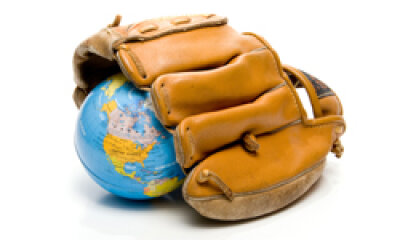 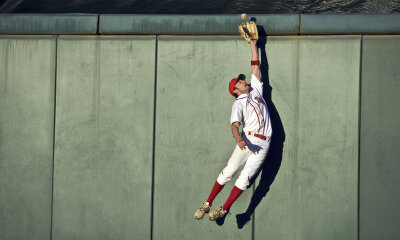