by Eric Seeger
Prev NEXT
1 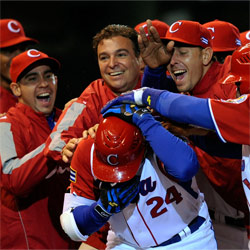 Frederich Cepeda, #24 of Cuba, is mobbed by teammates and team doctor Antonio Castro, top center, son of Fidel Castro, after hitting a three-run home run to end the game against Mexico in the 2009 World Baseball Classic.
Kevork Djansezian/Getty Images

Baseball may have started in North America, but over the last century, it has gone global. As evidence of the sport's international popularity, we had the Baseball World Cup, which started in 1938 to bring baseball-playing countries together under a single tournament. Organized by the International Baseball Federation (IBAF) and hosted by a different country every four (and later two) years, the World Cup featured amateur players until recently [source: IBAF].

So which country has the longest winning streak in the tournament? Not the United States. Actually, it's Cuba. Baseball is huge throughout Asia, the Caribbean islands, Central America, South America and even certain European countries, but it's just as popular in Cuba as in the States, and Cuba has the wins to show for it. Of the 39 World Cup series played over the years, Cuba took home the gold 25 times. The nation took nine straight trophies between 1984 and 2005, beating out teams from the United States, South Korea, Chinese Taipei, Nicaragua and Panama in the finals. Cuba so dominated the competition that it actually holds title to the top three winning streaks (9, 5 and 3 straight wins) [source: Baseball Reference].

Midway through Cuba's nine-game reign, the World Cup opened up to allow professional players to compete. During the 2000s, the World Cup's schedule changed, placing the series at the same time as spring training and allowing American big leaguers the opportunity to represent their country. With players like Barry Bonds, Mark McGwire, Alex Rodriguez and many others on the roster, the U.S. team beat Cuba in 2007 and 2009 to win the title [source: Baseball Reference]. The final World Cup was played in 2011 and was won by the Dutch team.

Today, the IBAF operates the World Baseball Classic, which is coordinated with Major League Baseball and professional baseball associations in various countries. Japan won the first two classics in 2006 and 2009, making for a mini streak of its own!

My son was only a few months old when the Red Sox made their historic World Series comeback. And he was right there in my arms, sucking on his bottle of formula, as we watched game seven against the Yankees in 2004 together. To be honest, I had never been a Sox fan before that, but how could you not get behind an underdog story like that? So we stayed up late to see how it all turned out. At the end of the evening, the Sox were headed to the World Series, and my boy went down for his first-ever full night of sleep. I'll never forget it.