5 Awesome Behind-the-scenes Facts About 'Rogue One'

by Bryan Young Dec 15, 2016
Stormtroopers march across the Millennium Bridge a couple of days after "Rogue One: A Star Wars Story" premiered in the U.K. Leon Neal/Getty Images

Last week, journalists from all over the world gathered at Lucasfilm's headquarters in San Francisco for the press conference for "Rogue One: A Star Wars Story." We were on hand as the cast and crew answered questions about one of the most anticipated films of 2016. Here's what we learned.

1. The film is meant to tackle modern sentiments.

Diego Luna plays Cassian Andor, a rebel intelligence agent. When we asked him about the moral complexity of the film, he said that it should resonate with modern viewers. The ethics of war, terrorism and resistance today are different from those at the time of the original film. "We live in a diverse world where racial and cultural diversity is, in fact, making us richer and more interesting," Luna said. "But it is a more complex world we live in and making the right choice, many times, looks horrible."

In the footage shown to the press, there is certainly a moral gray area that rarely was present in the previous installments of "Star Wars." "These people are in a war," Luna continued. "Cassian is a true hero, as Jyn and everyone else on the team — it's just that they're the heroes we can be. Just regular people doing amazing stuff. No special powers, no Jedi, just conviction and teamwork."

2. Alan Tudyk wore stilts and a motion-capture suit on set.

Alan Tudyk plays K-2SO, a former Imperial droid reprogrammed by the rebels. Instead of wearing a plastic costume, like C-3PO in the original "Star Wars" saga, Tudyk filmed the movie in a motion-capture suit and stilts to reach the appropriate height. "I was 7 feet 1 inch [216 centimeters]," he said. "At that height, it colors how you move and helped me get into character. It was fantastic."

Tudyk so completely embodied the role, director Gareth Edwards explained, that the editors couldn't tweak the animation of Tudyk's performance. "Every single time we did that, it didn't work. So, we had to bring him back and re-record his performance because Alan is Kaytoo," said Edwards.

Diego Luna was the only dissenting voice for this method of acting for K-2SO, as the stilts put Tudyk's crotch right in his face for most takes. "We couldn't take him seriously for the first month. [The motion-capture suit was] the tightest pajamas ever," he said.

"The first thing you have to get over is the fact that you're doing a scene with Darth Vader," says Ben Mendolsohn, who plays the villain Orson Krennic. "That took me a little while. I'm a first-generation fanboy."

Gareth Edwards had a slightly different take on the situation, recalling the first day with Vader on the set. Mendelsohn asked Edwards if he was alright in the middle of their first scene. "He's like, 'No. That's Darth [expletive] Vader.'" The two spent time "geeking out" before regaining their professional composure.

Gareth Edwards got emotional at the press event when asked whether George Lucas had seen the film. Lucasfilm screened it for the "Star Wars" creator just two days prior to the conference. Lucas called Edwards, interrupting a long day of press interviews. "I don't want to put words into his mouth, but I can honestly say I can die happy now," Edwards said. "He really liked the movie. To be honest, it was the most important review to me."

With the increased focus on diversity in the casting of each new "Star Wars" film, questions naturally arose for producer and Lucasfilm president Kathleen Kennedy about having a female director come on board. Though some controversy swirled over her previous comments, Kennedy was upfront in her commitment to give a woman a shot at directing a "Star Wars" movie. "If someone ... wants to make a 'Star Wars' movie and shows that they have stepped into the role on that level," she said, "of course we're going to consider a woman. That goes without saying."

The time for a female "Star Wars" director might come sooner rather than later. Kennedy revealed that she felt there were many qualified female directors in Hollywood, and that she talked to many of them on the job.

Now That's Funny
During the filming of the opening scene, Ben Mendolsohn sang songs ranging from "Billie Jean" to the soundtrack of "Frozen," much to the surprise of Gareth Edwards. 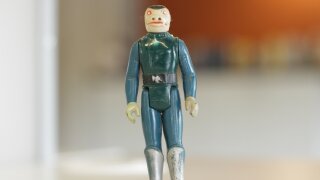 Who Said It: 'Star Wars: The Force Awakens' Quiz