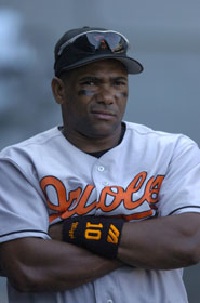 Miguel Tejada of the Orioles belted 27 homers in the 2004 Home Run Derby.
©SportPic

In 2004, Petco Park opened in San Diego, and the steroids scandal came to baseball. Here are some of the headlines from the 2004 baseball season:

Fans and Pitchers Delighted with Petco

San Diego's Petco Park opened to rave reviews in 2004. The ballpark incorporated the city skyline and boasted stucco walls, a palm court, Jacaranda trees, and even water walls. Beyond the outfield fence, fans could enjoy a "beach" and a "park." Petco also featured pitcher-friendly dimensions. The Padres hit just .256 with 57 homers at home in 2004, as opposed to 288 with 82 round-trippers on the road.

Revelations of steroid use from former MVPs Jason Giambi, Mark McGwire, and Ken Caminiti (who died on October 10) led to rumors concerning other stars, including Barry Bonds and Gary Sheffield. Commissioner Bud Selig promised action, but some wondered whether the problem would ever be fixed.

Viewed as a disappointment in St. Louis, outfielder J.D. Drew was dealt to Atlanta prior to 2004 and enjoyed his best season, leading the Braves to the National League East title. Batting .305 with 31 homers and 118 walks, Drew ranked fourth in the league in on-base percentage, adding punch to a formerly sagging Braves lineup. He also avoided serious injury for the first time, playing in a career-best 145 games.

Dodgers third sacker Adrian Beltre, in the last year of his contract, exploded into MVP territory in 2004, batting .334 and topping the majors with 48 home runs -- tied with Mike Schmidt for the most ever by a major league third baseman in a season. Many of his homers were game-winners, as he almost singlehandedly lifted the Dodgers to the National League West title. Following the season, he signed a five-year, $64-million deal with Seattle.

Those who already felt that the Yankees' Mariano Rivera was the greatest closer in baseball history could point to his career-high 53 saves in 2004, a total that led the majors. Helping New York win an American League-best 101 games, the 34-year-old Rivera again used his trademark cut fastball to shatter bats, allowing just three home runs in 79 innings.

Vladimir Guerrero moved to sunny California in 2004 and led the Angels' charge to the American League West title. Earning the American League MVP Award on the strength of a .337-39-126 performance, the 28-year-old Superstar topped the American League in runs (124), total bases (366), and outfield assists (13). He became the first Angels outfielder to start in the All-Star Game since Reggie Jackson in 1984.

On July 12, 2004, the Orioles' Miguel Tejada belted a record 27 homers in the Home Run Derby, held in Houston prior to the All-Star Game. Tejada's Derby performance was just part of a stellar campaign in which he played in all 162 games and amassed a league-leading 150 RBI. He also ranked among the American League's top ten in homers, hits, doubles, total bases, and extra-base hits.

On August 7, 2004, Cubs right-hander Greg Maddux notched his 300th career victory at San Francisco. After the season, he was awarded a Gold Glove -- the 14th of his career. Overall, however, 2004 was disappointing for the Hall of Fame-bound 38-year-old. While he finished 16-11, winning at least 15 games for a major league-record 17th consecutive season, Maddux had to watch the playoffs on television. The Cubs, in the catbird seat for the wildcard berth, lost five straight at home in the season's final week.

Check out more headlines from the 2004 baseball season on the next page.