For many baseball fans, the 2003 baseball season was an exercise in what might have been. Hopes for a World Series of the historically misbegotten were dashed when the Boston Red Sox and Chicago Cubs lost their 2003 World Series bids in heartbreaking fashion.

The surprising Cubs captured the National League Central behind new manager Dusty Baker and a strong starting rotation. Chicago blew by the Atlanta Braves in their NLDS, then went up three games to two in the NLCS on the Florida Marlins (who had previously eliminated the Giants). But down 3-0 in the eighth of game six at Wrigley Field, the Marlins exploded for eight runs and an 8-3 victory. Carrying the momentum into game seven, Florida clinched the National League pennant with a 9-6 win.

The Marlins had snagged the wildcard with a combination of youth and experience. Manager Jack McKeon, age 72, took over a 16-22 squad in May and led it to the game's best record over the last four months. Catcher Ivan Rodriguez was a key contributor, and Ugueth Urbina, acquired in a trade, bolstered the bullpen. But kids provided the Marlins' magic. Their starting rotation was among the youngest in the game, with lefty Dontrelle Willis the National League Rookie of the Year. Speedsters Juan Pierre and Luis Castillo set the table for sluggers Derrek Lee and Mike Lowell.

The American League picture wasn't quite as surprising. The Yankees and Red Sox finished first and second in the East, then won their Division Series to set up a "dream" ALCS. Down 3-2 in games, the Red Sox beat the Yankees in game six at Yankee Stadium, then led 5-2 in the last of the eighth in game seven. But the Yankees came back and tied the score against Red Sox ace Pedro Martinez, who in retrospect stayed in the game too long (a decision that cost Boston manager Grady Little his job). The nailbiter ended in the last of the 11th when Aaron Boone's homer sent the Yankees to a 6-5 win and another trip to the World Series.

The vaunted Yankees and their legacy, however, held no sway over the young Marlins, who confidently split the first four games of the fall classic. Game five was the turning point. Yankees starter David Wells left after one inning with back spasms. Florida jumped on the Yankees bullpen, then held on for a 6-4 win. Game six, back at Yankee Stadium, was all Josh Beckett. The oft-injured young Marlins hurler shut out the Bronx Bombers on five hits to give his team its second world title, despite being outscored in the series 21-17.

While salaries continued to rise, and the Red Sox and Yankees dominated the headlines, the good news for fans of "small market" teams was that for the third straight year, an unexpected club won it all. Each world champ prevailed through team-work and a varied attack rather than relying on one or two big-salaried stars. And the TV ratings for the exciting postseason bore out the value of unexpected participants.

While Barry Bonds of the National League West-champion Giants won his sixth National League MVP Award, most award winners finished far out of the playoff picture. American League MVP Alex Rodriguez's Texas Rangers placed last. American League Rookie of the Year Angel Berroa played for Kansas City, which contended early but slumped, and Cy Young winner Roy Halladay toiled for third-place Toronto. Eric Gagne, who saved 55 straight for the Dodgers, won the National League Cy Young, though his club finished 15 games out. Also out of contention were the Montreal Expos, who played 22 of their "home" games in San Juan, Puerto Rico, as MLB continued to consider relocating the club.

The next page provides headlines and summaries for some of the top stories of the 2003 baseball season. 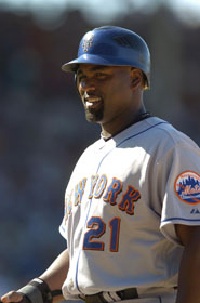 In 2003, Rafael Palmeiro made his 500th home run, and Barry Bonds earned his sixth National League MVP. Here are some of the headlines from the 2003 baseball season:

Once again, Oakland's formidable starting pitching led the A's to the playoffs in 2003. The Big Three of Tim Hudson, Barry Zito, and Mark Mulder helped Oakland lead the league with a 3.63 ERA and clinch the American League West by three games over Seattle. Hudson finished 16-7 while ranking second among American League hurlers with a 2.70 ERA.

The Tigers set an American League record for losses (43-119) and had to win five of their last six to avoid tying the 1962 Mets' major league record. Starters Mike Maroth, Jeremy Bonderman, Nate Cornejo, and Adam Bernero were 9-21, 6-19, 6-17, and 1-12, respectively, and the "attack" scored 108 fewer runs than any other American League club. The Tigers also led the league in errors.

Texas' Rafael Palmeiro had long been one of the game's most consistent and underrated hitters. Palmeiro clouted at least 38 homers every season from 1995 through 2003, making him the first slugger in major league history to achieve the feat nine straight years.

Yankee Roger Clemens had been chasing 300 wins and 4,000 strikeouts for years, and on June 13, 2003, he achieved both feats in the same game against St. Louis. He ended the season in possession of the American League's all-time strikeout record. Late in the year, Clemens announced plans to retire, but he recanted and later signed with Houston for 2004.

In his first full major league season, Cubs starter Mark Prior proved to be one of the game's dominant pitchers. Heading a strong rotation that also included Kerry Wood, Carlos Zambrano, and Matt Clement, Prior ranked among the National League's top three in wins (18-6), ERA (2.43), and strikeouts (245). The Cubs' strong hurling led to a surprising National League Central title and an upset of the Braves in the NLDS.

Lefty Dontrelle Willis made just six Starts in Double-A before joining the Marlins in May 2003. He proceeded to go 9-1 by July 13 and 14-6 overall, earning the National League Rookie of the Year Award. The Marlins, under 72-year-old skipper Jack McKeon, won a surprise wildcard spot en route to their 2003 World Series upset of the Yankees.

Barry Bonds couldn't fully enjoy his record sixth National League MVP season in 2003. In addition to smashing .341 with 45 homers, he recorded his 500th career stolen base on June 23, making him the first ever to steal 500 sacks and hit 500 homers. Moreover, the Giants won 100 games and ran away with the National League West. Unfortunately, Bonds's joy was tempered by the loss of his father, former Giants standout Bobby Bonds, who died of cancer on August 23.

Toronto first baseman Carlos Delgado led the American League with 145 RBI in 2003, besting second-place Alex Rodriguez by a margin of 27 -- one of the largest gaps in history. Delgado also finished second in the American League in home runs (42), on-base percentage (.426), and slugging percentage (.593). On September 25, he smashed four homers in one game against the Devil Rays.

Check out more headlines from the 2003 baseball season on the next page.

Below are more headlines from the 2003 baseball season, including the Braves' 101 wins and the Cubs' continued failure to make it to the World Series.

In 2003, the Red Sox led the major leagues in runs with 961. David Ortiz belted 31 homers, while Manny Ramirez, Nomar Garciaparra, and batting champion Bill Mueller also bashed the cowhide. The pitching was thin, but Pedro Martinez led the league with a 2.22 ERA and finished second (by just one) in strikeouts despite making just 29 Starts. Boston earned a wildcard berth with 95 victories.

Though his Rangers finished last in the American League West in 2003, Alex Rodriguez earned the American League MVP Award. A-Rod won his third straight home run title (47) and paced the league in runs (124) and slugging percentage (.600). He also captured his second Gold Glove, and on April 2 he became, at 27, the youngest player ever to reach 300 homers. A-Rod finished 2003 with 344 homers as a shortstop, trailing all-time record-holder Cal Ripken by just one.

Toronto's Roy Halladay did not win a single game in April 2003, but he finished 22-7 thanks to 15 straight victories -- a performance that earned him the Cy Young Award. Halladay allowed the most hits in the league (253), but he walked only 32 men in 266 innings. His 3.25 ERA ranked fifth in the American League.

Third-year man Albert Pujols of the Cardinals continued to scale new heights in 2003. Besides winning the batting title at .359, he clubbed 43 homers and led the National League in runs (137), hits (212), total bases (394), and doubles (51). Pujols, runner-up in MVP voting to Barry Bonds, shared with Ralph Kiner the major league record for most homers (114) by a player in his first three seasons.

Dodgers closer Eric Gagne was an easy National League Cy Young winner. Gagne didn't blow a single save chance during the season, and through the end of the campaign had converted a major league-record 63 consecutive save opportunities. Fanning 137 men in just 82 innings in 2003, Gagne successfully completed his transformation from struggling starter to the game's most overpowering late-inning reliever.

The Braves in 2003 won 101 games, the most in the National League, but did so -- surprisingly -- with great hitting rather than their usual pitching skill. Outfielder Gary Sheffield was the club's offensive star, rapping .330 with 39 homers and 132 RBI, but the attack was balanced. Catcher Javy Lopez, second baseman Marcus Giles, shortstop Rafael Furcal, and out-fielders Andruw Jones and Chipper Jones all helped make Atlanta's offense the league's most productive.

Cubs fan Steve Bartman picked a bad time to test his fielding skills. Chicago left fielder Moises Alou claimed Bartman interfered with the ball in the eighth inning of game six of the 2003 NLCS. The flood-gates immediately opened, as the Marlins plated eight runs to win 8-3. They then beat Kerry Wood in game seven, 9-6, extending the Cubs' World Series drought to 58 years.

New York third baseman Aaron Boone's 11th-inning walk-off homer extended the "Curse of the Bambino," as the Red Sox -- who appeared to have the game in hand in the eighth inning -- once again failed to bring home the bacon. The thrilling Yankees-Red Sox playoff featured three one-run games and several thrilling comebacks.

The next page highlights key events and details from the 2003 baseball season. 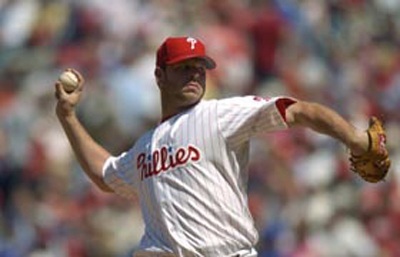 Below are more highlights of the 2003 baseball season, including Roger Clemens of the Yankees winning his 300th game and Juan Pierre leading the National League in steals.