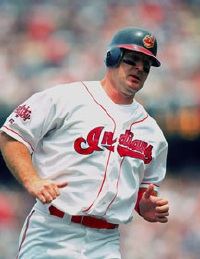 The 1997 baseball season was a good one for fans of the Florida Marlins -- they didn't have to wait long to celebrate a world championship. The 1993 expansion club squeaked into the playoffs through the wildcard but knocked off three heavily favored teams to sit atop the baseball world -- if only for a little while.

The Marlins, headed by veteran manager Jim Leyland, featured just three pitchers in double figures in wins (Kevin Brown at 16-8, Alex Fernandez at 17-12, and Al Leiter at 11-9). But they had quality players at every position, including left fielder Moises Alou (23 homers, 115 runs batted in) and Gold Glove catcher Charles Johnson (19 dingers, 63 RBI).

After earning the wildcard berth, Florida knocked off the Giants in the first round. San Francisco led in each game, but ultimately fell. The underdog Marlins then took the Braves in six to win the National League title, battering Atlanta pitching stars Tom Glavine and John Smoltz. Prior to losing the NLCS, the Braves had easily extinguished National League Central champ Houston.

The biggest individual stories in the National League were Tony Gwynn, who hit .372 in winning his eighth bat crown, and MVP winner Larry Walker, who slugged 49 homers for the Rockies. Only one National League pitcher, Denny Neagle of Atlanta, won 20 games, but the senior circuit's Cy Young Award winner was Montreal's Pedro Martinez (1.90 ERA, 305 whiffs).

Meanwhile, despite great seasons from American League Cy Young winner Roger Clemens (21-7, 2.05 ERA) and Randy Johnson (20-4), homers flew out of American League ballparks. Mark McGwire rapped 34 homers for Oakland before a July 31 trade to St. Louis, where he added 24 more. Big Mac's 58 homers were the most hit by any player since Roger Maris in 1961. Frank Thomas of the White Sox hit .347 to win the batting title and added 35 homers of his own. Seattle's Ken Griffey, the American League's MVP, knocked 56 four-baggers and drove in 147.

Griffey's heroics helped the Mariners win the American League West, but Seattle was shut down by Baltimore in the first round of playoffs. The Orioles then went on to lose to the Cleveland Indians, who had previously vanquished the wildcard Yankees, in the ALCS.

The 1997 World Series, though sometimes comically sloppy, was highly entertaining. After splitting the first two games in Miami, the teams moved to Cleveland and were greeted by high winds and freezing rain. Game three, which took more than four hours to play, featured six errors in a 14-11 Marlins win. The Tribe had blown an earlier 7-3 lead and allowed seven runs in the ninth.

The teams then traded victories before returning to much warmer Miami. In game six, Chad Ogea stepped up and pitched Cleveland to a 4-1 win, forcing a final winner-take-all matchup.

Game seven was one of the most thrilling World Series games ever. The Indians held a 2-0 lead before the Marlins scored one on Bobby Bonilla's seventh-inning homer. In the last of the ninth, facing defeat, Florida tallied again on second baseman Craig Counsell's sacrifice fly.

In the home 11th, Counsell reached on Tony Fernandez's error. A walk and an infield out later, he stood on third. Marlins shortstop Edgar Renteria then rapped a single up the middle to score Counsell, end the series, and send 67,204 fans into hysterics.

However, Miami fans' ardor was cooled during the winter. Owner Wayne Huizenga, intending to sell the club, cut costs by trading most of the key players from the series club.

The next page provides headlines and summaries for some of the top stories of the 1997 baseball season.

In 1997, Mark McGwire hit 58 home runs, and Barry Bonds had great stats -- again. Here are some of the headlines from the 1997 baseball season:

Larry Walker did it all for the Colorado Rockies in 1997. The oft-injured Walker managed to stay healthy and (not coincidentally) enjoyed his finest season. He hit for power (a league-leading 49 homers) and average (.366), drove in 130 runs, stole 33 bases, drew 78 walks, and even threw out 12 baserunners from right field. As his reward, Walker took home the National League's Most Valuable Player trophy.

A July 31 deal sent Mark McGwire from the Oakland Athletics to the grateful St. Louis Cardinals. McGwire had already hit 34 homers for Oakland and added 24 more in 51 games with the Redbirds, becoming an instant fan favorite in the Mound City. His 58 total homers tied the mark set by Jimmie Foxx in 1932 for the most ever by a righthanded hitter.

Seattle's Ken Griffey Jr. batted .304 with 56 home runs and 147 RBI (both of which led the American League) in 1997 to become the 13th man to win unanimous selection as his league's Most Valuable Player. Griffey had the best season of his career, leading the Mariners to the playoffs. Unfortunately for Seattle fans, Seattle lost to Baltimore in the Division Series as Junior was just 2-for-15.

Cementing his reputation as the top offensive catcher in baseball history, Dodger Mike Piazza rapped 201 hits in 1997 and batted .362. He added 40 homers and 124 RBI. In another season, Piazza might well have piled up the awards. But for the second straight year, he finished second in National League MVP voting -- this time behind Larry Walker of the Rockies.

Craig Biggio, Houston's scrappy second baseman, had one of the all-time great run-scoring campaigns in 1997. Crossing the plate 146 times during the club's division-winning season, Biggio scored more runs than any National League player since Hall of Famer Chuck Klein tallied 152 in 1932. How did Biggio do it? Batting .309 with 84 walks, 22 homers, 37 doubles, and 47 steals didn't hurt, and batting ahead of Jeff Bagwell helped too.

Just one year after being called "washed up" by some in Boston, Roger Clemens won his fourth American League Cy Young Award -- for the Blue Jays. Clemens won the pitching "Triple Crown," leading the American League in strikeouts, wins, and ERA, becoming the first American League hurler to do so since Detroit's Hal Newhouser in 1945. Oddly, Clemens was 21-4 against the junior circuit but 0-3 against National League clubs.

Tino Martinez Steps It Up

The seemingly mechanical superstar, Barry Bonds of San Francisco enjoyed another monster year in 1997, hitting .291 with 145 walks and 40 home runs. He also swiped 37 bases. It was the 33-year-old Bonds's fifth season of 30 homers and 30 steals, matching the mark held by another star Giants outfielder -- his father, Bobby Bonds.

Check out more headlines from the 1997 season on the next page.

Below are more headlines from the 1997 baseball season, including Eric Davis continuing to play even after a cancer diagnosis and Nomar Garciaparra's amazing rookie year.

Young Pedro Martinez of Montreal made a quantum leap in 1997 and became the game's top pitcher. Pacing the National League with a 1.90 ERA and 13 complete games, Martinez fanned 305 hitters and fashioned a 17-8 mark for an Expos team that finished 78-84. The financially strapped Montreal club responded to Pedro's great season by trading him to the Boston Red Sox.

Eric Davis Back from Illness

When Orioles outfielder Eric Davis was diagnosed in midseason with colon cancer, many thought he would retire. Davis, however, returned to active duty on September 15. He even clouted a home run in the Birds' playoff series loss against Cleveland. After the season, he was presented with the Baseball Writers Association's Tony Conigliaro Award for his courage and determination.

In his first full season for the Atlanta Braves, left-handed hurler Denny Neagle blossomed into one of the league's most effective pitchers. He set career highs in nearly every category, ending with a 20-5 mark and a fine 2.97 ERA. The 29-year-old, who got his big outs with a devastating change, also tossed 12 scoreless innings in the NLCS before undergoing shoulder surgery days later.

San Diego's amazing Tony Gwynn enjoyed his greatest season in 1997. Playing on bad knees at age 37, Gwynn led the majors by batting .372, added 49 doubles, and drove in 119 runs. He won his fourth straight batting crown (and eighth overall), rapped 220 hits, and even hit an inside-the-park grand slam against Los Angeles.

When the Cleveland Indians acquired star third baseman Matt Williams from San Francisco, holdover Jim Thome took his glove across the diamond to first base and just kept on hitting. He slugged a career-best 40 homers, drove in 102, and led the American League by drawing 120 walks for the Tribe in 1997. Thome then added two homers in the 1997 World Series.

A Star Is Born in Beantown

Busting into the majors with one of the greatest rookie seasons in recent memory, Boston shortstop Nomar Garciaparra hit .306 with 44 doubles and 30 homers and paced the American League in at-bats, triples, and hits. An outstanding shortstop with good range and a rocket arm, the former first-round pick won favor both from fans and sports writers, who voted him a unanimous Rookie of the Year.

Righty Chad Ogea of the Indians won two games in the 1997 World Series -- both victories, ironically, coming in Florida. Ogea (just 8-9 in the regular season) and the Tribe had vanquished the Yankees in a five-game Division Series and the Orioles in a six-game ALCS to reach the fall classic, but once again came away disappointed at Series time.

After taking the 1996 season off to concentrate exclusively on his football career, Deion Sanders returned to the Cincinnati Reds in 1997. Despite playing just 115 games (still a career high), Sanders finished second in the National League in stolen bases with 56. He batted .273 and led the injury-riddled Reds with 127 hits in what would be his final season as a major league baseball player.

Craig Counsell a 26-year-old rookie, took over at second base for Florida late in the 1997 season and batted .299 in 51 games to help spark the club's surprising 1997 World Championship.

The next page highlights key events and details from the 1997 baseball season. 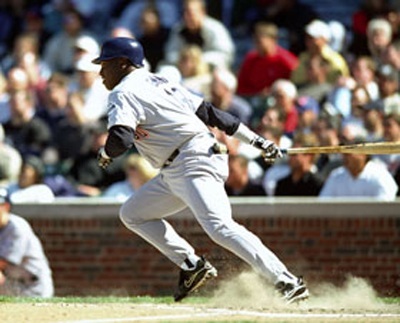 Below are more highlights of the 1997 baseball season highlights, including Tony Womack's 32 steals and a 3-game series in Honolulu between the Cardinals and the Padres: