In 1869, the Cincinnati Red Stockings, baseball's first professional team, were crowned national champions after they romped through the entire season undefeated. Since then the country has annually feted a professional baseball champion. That string came to a rude end in the 1994 baseball season.

At midnight on August 12, both major leagues shut down when the players union refused to accept a salary cap proposed by the owners. Blocking a compromise settlement was the continued absence of a commissioner to mediate between the two parties.

Commenting on the strike, White Sox star Frank Thomas said, "I've had a career year, but I'm not going to finish it." Thomas's self-assessment was accurate. Though the White Sox played only 113 games, Thomas already had 101 RBI, 106 runs, 38 home runs, and 34 doubles to go with his .353 BA. Other performers had equally imposing stats. In an abbreviated 115-game schedule, San Francisco third sacker Matt Williams clubbed 43 homers, just 18 short of Roger Maris's record of 61.

Even more disappointing to fans expecting a banner finish was the fact that several long-slumbering teams had awakened in 1994.

Prior to the season both major leagues had been split into three divisions, and an extra playoff tier was added. The new structure called for five-team divisions in the East and the Central and a four-team division in the West.

The Braves and the Phillies, the two National League division winners in '93, were both situated in the East. After Phillies first sacker John Kruk was sidelined to undergo cancer treatment, the Braves looked like a lock to bag their fourth straight division crown. But Expos skipper Felipe Alou, helped by his son Moises, took a young team to the front early and seemed destined to hold the lead.

When the strike hit, the Expos stood six games up on the Braves with the best record in the majors (74-40). Second only to the Expos were the New York Yankees, who paced the American League East by 6-1/2 games. Absent from postseason play for 13 years, the Yankees were the antithesis of the home-grown Expos, as George Steinbrenner continued prowling the trade and free-agent markets.

Cleveland also profited in 1994 via the trade and free-agent route. Shedding their reputation for being one of the most ineptly run franchises, the Indians went for broke in conjunction with the opening of their new stadium.

For the first time since 1954, Cleveland seemed likely to see postseason action. The Indians trailed the White Sox by only one game in the American League Central at strike time and headed the list for the loop wild-card berth. Texas Rangers fans were also ecstatic to see their club atop the American League West and possibly slated for the franchise's first-ever postseason engagement. The Seattle Mariners, another franchise that had never tasted postseason action, were a mere two games behind the Rangers when play stopped.

At midnight on August 12, nine American League teams and seven National League teams still had strong playoff hopes, and many other stars beside Frank Thomas and Matt Williams were enjoying career years. But there would be no finish to one of the potentially most remarkable seasons in the game's history. In September, Brewers owner and acting commissioner Bud Selig acknowledged that the strike had torn an irreparable hole in the game's fabric when he officially announced that the 1994 season was dead.

The next page provides headlines and summaries of for some of the top stories of the 1994 baseball season. 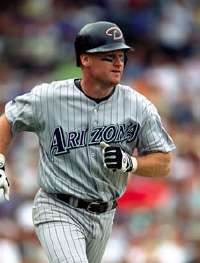 ©SportPic Prior to the strike of 1994, Matt Williams was a favorite to break the National League season home run record.

In 1994, players like Tony Gwynn and Matt Williams had their potentially record-breaking seasons cut short by the players strike. Here are some of the headlines from the 1994 baseball season:

Cleveland unveiled beautiful Jacobs Field in 1994. Named after owner Richard Jacobs, the Indians' new home was deliberately designed to look like an old-time park, and for the first time in 40 years the Tribe also had the look of old. A perennial contender prior to the mid-1950s, Cleveland was in the process of making its first serious pennant bid since 1959 when the strike halted the Indians' playoff hopes. Jacobs Field was an integral part of the renaissance the city of Cleveland underwent in the mid-'90s and a contributing factor to renewed fan interest in the Tribe.

Jeff Bagwell, whose left wrist was broken by a pitch on August 10, had been having the best year of any major leaguer prior to the strike and his injury. Bagwell had been mustering himself for a drive to become the National League's first Triple Crown winner since Ducky Medwick in 1937. The Astros star had to content himself with the National League RBI title (116) and a .368 batting average, second in the National League.

Frank Thomas combined awesome power, a high average, and excellent strike-zone judgment on his way to his second straight American League MVP Award in 1994. He had hoped to collect a World Series championship ring as well. The Sox were locked in a tight three-way race with Cleveland and Kansas City for the top spot in the American League Central at strike time but counted on prevailing with the best pitching staff in the American League.

Thanks to the strike, Yankee Paul O'Neill became the first American Leaguer since Billy Goodman in 1950 to win a batting crown despite playing fewer than 100 games in the field. O'Neill was also the first player since Dale Alexander (1932) to bag an American League bat title with fewer than 400 at-bats. His .359 mark was the best in 40 years by a Yankee.

After leading the majors in total strikeouts from 1990 through 1992, David Cone decided to concentrate on control and rely on his defense in 1994. As a result, he took home his first Cy Young Award. Taking command of his once-fiery temper, Cone had streaks of eight straight wins and 29 consecutive scoreless innings in 1994. He averaged seven hits, seven strikeouts, and less than three walks per nine innings. He was untouchable on May 22, when he tossed a one-hit shutout against the Angels.

Were it not for the strike in 1994, Tony Gwynn of the Padres might have been the first National Leaguer since 1930 to bat .400. Instead, Gwynn ended the season hitting .394. Matt Williams might also have become the first National Leaguer to hit 60 home runs, and a host of other senior loop records might have toppled as well. Craig Biggio and Larry Walker (44 doubles each) could have challenged Earl Webb's major-league record of 67. Only Hack Wilson's record of 190 RBI remained, as always, beyond assault.

When he hit .316 in just his second full big-league season, Boston's John Valentin awakened observers to the fact that he might one day be a treasure. Valentin also displayed good power, finishing second on the Red Sox in slugging average. On July 8, 1994, Valentin became the second player in big-league history to perform an unassisted triple play and hit a home run in the same inning.

Matt Williams was a heavy favorite before the strike interruption to break the National League single-season home run record of 56. Whether he would also have broken Roger Maris's major league single-season mark we'll never know, as he wound up with 43 dingers on the shortened year. The strike-abbreviated season also contributed to Williams being the first National League player since 1973 to club 40 or more homers with fewer than 100 RBI.

Check out more headlines from the 1994 baseball season on the next page.

Below are more headlines from the 1994 baseball season, including Greg Maddux winning his third Cy Young Award in a row and the retirement of Ryne Sandberg.

The Dodgers continued their phenomenal streak of producing National League ROTY winners. The latest, outfielder Raul Mondesi, hit .306 with 16 homers in 1993. Mondesi's 42 games and 86 at-bats in 1992 would have excluded him from rookie status at one time. Shoeless Joe Jackson's .408 BA in his first full year, for example, is not considered the rookie record because he had previously played 30 games in the majors.

Pitcher Kenny Rogers hurled the first perfect game in Rangers history -- and only the 14th in baseball history -- on July 28, shutting down California at The Ballpark in Arlington. Rogers's perfecto was the highlight of both his and his team's otherwise rocky season. Despite winding up ten games below .500, the Rangers were nonetheless poised for their first postseason appearance when the strike dashed their hopes.

Ken Griffey Jr. seemed destined for a super season in 1994. After collecting 20 home runs in his first 42 games -- matching Mickey Mantle's 1956 start -- he appeared on the cover of Sports Illustrated a single-season-record three times. A mid-year slump followed by the strike held down Junior's numbers, but he still set Mariners franchise records for home runs (40) and slugging average (.674).

Rookie Astros relief ace John Hudek in 1994 became the first pitcher ever to be selected for an All Star Game before achieving his first major league win. Hudek finished the 1994 campaign still searching for his initial big-league victory but compiled a club-high 16 save.

Kansas City fans called him the "Hammer." Bob Hamelin earned that nickname by becoming the team's top slugger as a 1994 rookie and batting .282 with 65 RBI. The burly slugger carried off the American League Rookie of the Year prize on the basis of his 24 homers, but most veteran baseball experts believed Cleveland outfielder Manny Ramirez was by far the most promising junior circuit frosh.

Atlanta's Greg Maddux became the first hurler ever to win the Cy Young Award three years in a row. Maddux was clearly the best pitcher in either league. There was little need to vote: Maddux led the league in ERA (1.56), complete games (ten), and innings pitched (202) and tied for the lead in wins (16) in the strike-shortened season.

On September 9, 1977, Alan Trammell and Lou Whitaker formed the Tigers keystone combo for the first time. They were still keystone mates in 1994, shattering all records for longevity by a shortstop/second-base teammate duo. Trammell's and Whitaker's endurance mark notwithstanding, the Tigers finished last in the American League East in 1994 -- albeit with a better record than Texas, the American League West leader when the strike shut down the season.

Ryne Sandberg set baseball on its ear when he announced his retirement at a press conference on June 13, claiming he no longer felt he was earning his multimillion-dollar salary. Sandberg stepped down with the highest career fielding average in history by a second baseman as well as 245 career home runs, the most by any National League middle infielder except Joe Morgan since World War II.

The next page highlights key events and details from the 1994 baseball sesason. 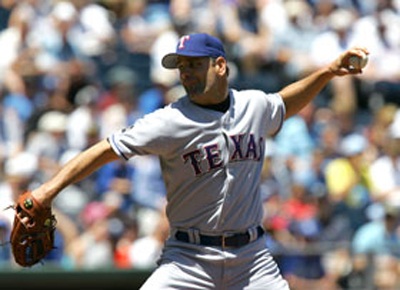 During the 1994 baseball season, both major leagues shut down when the players union refused to accept a salary cap proposed by the owners. Players like Frank Thomas and Matt Williams were enjoying career years before the strike hit, but there would be no finish to the year. Below, you will find the highlights from the 1994 baseball season:

For more highlights of the 1994 baseball season, see the next page.

See below for more highlights of the 1994 baseball season, including Bob Hamelin winning the American League's Rookie of the Year Award and Darryl Strawberry signing with the Giants.