Hershiser's most remarkable feat was "The Streak." At the end of August, he became virtually unhittable, pitching 59 scoreless innings to beat Don Drysdale's record of 58 set in 1968. To no one's surprise, Hershiser won the 1988 Cy Young Award, racking up a 23-8 season, 2.26 ERA, 15 complete games, and eight shutouts.

It was a surprise, though, that Los Angeles won the West, 7 games ahead of the Reds. Although Cincinnati was good -- Danny Jackson led the league with 23 wins, Tom Browning had a perfect game against Los Angeles on September 16, and the team had a division-topping 122 homers -- they weren't good enough.

New York's Darryl Strawberry, many opined, was more deserving of the title. Strawberry led the league with 39 homers and had 101 RBI, as New York won 100 ball games, 15 better than the second-place Pirates. The quietest left fielder in baseball, Kevin McReynolds let his bat do the talking, hitting .288 with 27 round-trippers and 99 RBI. Minor league sensation Gregg Jefferies joined the club in September to hit a sizzling .321.

The man in the American League that everyone was talking about was circuit MVP Jose Canseco, the first man in baseball history to hit 40 homers and steal 40 bases in a single season. Leading Oakland to its first pennant since 1974, the 6'3", 220-pound slugger terrorized the opposition with his major league-best 42 homers, 124 RBI, and .307 batting average.

In the American League East, Boston was going nowhere fast until coach Joe Morgan replaced John McNamara in the middle of July. The Red Sox won 19 of their first 20 contests under Morgan, finishing just 1 game ahead of Sparky Anderson's Tigers. Wade Boggs ignored his off-the-field exploits (a $6 million palimony suit) to lead the league in hitting -- with a .366 average -- for the fourth consecutive season, topping the majors in three of those years. And a 24-year-old outfielder named Mike Greenwell hit like a young Ted Williams, racking up a .325 average, 22 homers, and 119 RBI.

The NLCS was a hard-fought battle. The Dodgers and the Mets alternated victories for the first six contests, with Los Angeles clinching the title in a seventh-game shutout courtesy of Hershiser. The A's swept the Red Sox in the ALCS. Canseco homered in the first, second, and fourth matches and had four RBI.

The 1988 World Series matched the surprising Dodgers against the mighty A's. Game one had one of the most improbable at-bats in World Series history: Trailing 4-3 with one on and two out in the bottom of the ninth, an injured Gibson limped to the plate as a pinch hitter. Gibson nailed a two-run homer over the right-field fence to give Los Angeles a 5-4 win.

The rest of the race belonged to Hershiser, the 1988 World Series MVP. The Bulldog won games two and five as Los Angeles stunned Oakland four games to one.

Find headlines and summaries of major stories from the 1988 baseball season on the next page. 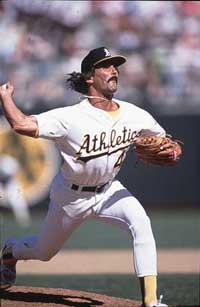 In 1988, venerable Wrigley Field installed lights, and Jay Howell was caught doctoring a ball with pine tar. Here are some of the headlines from the 1988 baseball season:

Oakland's Dennis Eckersley saved all four games of the 1988 American League Championship Series against the Red Sox. Coming off a banner year, Eckersley led the circuit with a phenomenal 45 saves -- just one short of the major league record -- and averaged 8.6 Ks a game. Wild in his early years, Eckersley walked just 11 in 76 innings during the season.

Rick Reuschel received a new lease on his career with the Giants, as he won 19 games in 1988, his first full season with the ballclub. He tied for the lead in the National League in both starts (36) and sacrifice hits (19). Reuschel finished the season with the most career victories (194) among active senior circuit pitchers.

Kevin McReynolds Has a Whopper of a Year

Kevin McReynolds enjoyed an outstanding season in 1988, hitting .288 with 27 homers and 99 RBI. The Mets left fielder set a major league season record for most stolen bases without being caught (21). In the National League Championship Series, Big Mac tied the tournament record for most hits in a game (four).

National League President A. Bartlett Giamatti inspected the glove of Jay Howell after it was discovered that the Dodger had used pine tar while pitching the eighth inning of game three of the 1988 League Championship Series. Giamatti decided to suspend Howell for three games. An appeal cut the suspension to two games. Howell didn't resurface until the ninth inning of game three of the 1988 World Series. The A's won the contest 2-1.

In his first full season with the Red Sox, Mike Greenwell proved that he was worthy to succeed the great Jim Rice as guardian of The Green Monster. The left fielder batted .325 with 22 homers and 119 RBI with just 38 strikeouts. Like Rice, the young slugger was a sometimes brutal fielder who was foiled time and again by the tricky bounces that balls took off the left-field wall in Fenway Park, 310 feet from home plate.

The Dodgers snared a pennant in 1988 when they secured the services of Kirk Gibson. The free agent won the 1988 National League MVP Award with a .290 batting average, 25 homers, and 76 RBI. He then racked up a pair of home runs and six RBI in the League Championship Series. One of his homers, a 12th-inning dinger, won game four; the other, a three-run round-tripper, won game five.

Wrigley Field Brings an End to an Era

In 1988, Chicago's Wrigley Field became the last major league ballpark to install lights. Although the issue met with opposition from nostalgic fans and residents, Wrigley executives nevertheless forged ahead with the plan. According to the agreement, the Cubs were limited to a maximum of 18 night games a season until the year 2002.

Check out more headlines from the 1988 baseball season on the next page.

Below are more headlines from the 1988 baseball season, including great performances by Tony Gwynn, Andre Dawson, and Orel Hershiser.

Despite his batting average dropping a colossal 57 points from 1987, Tony Gwynn still led the National League in batting in 1988 with a .313 average. Like Wade Boggs, his American League counterpart, the outfielder sacrificed much of his power for average; in 1988, Gwynn hit seven homers with 70 RBI.

Don Mattingly and Darryl Strawberry were the virtuosos of New York in the late 1980s. In 1988, Mattingly batted .311 with 18 homers and 88 RBI for the Yankees, and Strawberry hit an National League-leading 39 homers with 101 RBI. Despite the pressure on both franchises for a Subway Series, the only time the two stars and their teams would meet that year was in the annual Mayor's Trophy charity game.

No hurler ever finished a season the way Orel Hershiser wrapped up 1988. First, he pitched five straight shutouts. Then he broke Don Drysdale's consecutive-scoreless-innings streak (58 frames) of 1968 with a ten-inning scoreless no-decision against the Padres in his last start of the season. Finally, he stretched his 59-inning streak to 67 in the National League Championship Series against the Mets. Finishing the season with a 23-8 record and a 2.26 ERA, Hershiser received the 1988 Cy Young Award.

Oakland's Dave Stewart struck out Boston's Wade Boggs with the bases loaded in the second inning of the opening game of the 1988 American League Championship Series. The Red Sox lost the game 2-1, then the series in four straight. During the sweep, Stewart recorded one win, a 1.35 ERA, and 11 strikeouts in 131/3 innings; Boggs tallied a .385 average with three RBI.

A 1990 sportscaster poll named Kirk Gibson's home run that clinched game one of the 1988 World Series as one of the most dramatic moments in baseball history. The injured outfielder could only hobble around the bases after whacking a 3-2 pitch from A's reliever Dennis Eckersley to bag a 5-4 Dodger victory. In his only Series at-bat, he fouled off four pitches before nailing the clincher. It was the perfect finale to Gibson's 1988 year (.290 average, 25 round-trippers, 76 RBI).

Jeff "The Terminator" Reardon saved a career-high 42 games in 1988 (second in the American League). Reardon was the lone reliever to compile at least 20 saves each season from 1982-1988. With a total of 287 saves after 1990, Reardon ranks among baseball's all-time leaders in saves.

Despite a sharp drop-off from his 1987 stats, Andre Dawson enjoyed a solid season in 1988, capturing a Gold Glove for outfielding while batting .303 with 24 homers and 79 RBI. The former Expo was easily the best free agent signing in Cub history.

Find highlights from the 1988 baseball season on the next page. 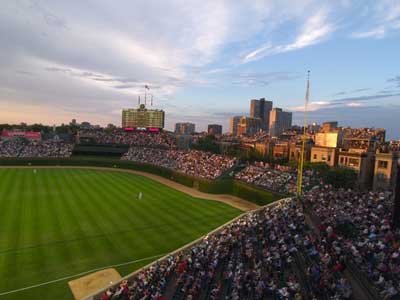 See the next page for more highlights of the 1988 baseball season.

Below are more highlights of the 1988 baseball season, including new records and year-end awards.