Three of the four divisions offered close contests. In the American League East, Toronto edged the Yankees by 2 games. The Blue Jays were led by the fantastic outfield of Lloyd Moseby, Jesse Barfield, and George Bell, who combined for 73 homers. Barfield also had a lethal arm, racking up 27 assists.

The Yankees boasted a devastating lineup with MVP Don Mattingly (48 doubles, 145 RBI), Dave Winfield (114 RBI), Rickey Henderson (146 runs, 80 steals), and Don Baylor. Ron Guidry had a strong season, too, winning 22 games. The Yankees chased Toronto throughout the summer, never overtaking them, then replaced Martin with Lou Piniella in the off-season.

The Royals won their division with a pitching staff spearheaded by Cy Young winner Bret Saberhagen, who went 20-6 with a 2.87 ERA. George Brett had one of his finest seasons, batting .335 and driving in 112 runs.

The Cardinals won the National League East, thanks to MVP Willie McGee and his National League-best .353 average. St. Louis edged out the Mets, who were led by phenom Dwight Gooden. Gooden won the Cy Young Award with a league-leading 24 wins, 268 strikeouts, and 1.53 ERA.

In the National League West, Tommy Lasorda's Dodgers won the division on the pitching of Orel Hershiser (who went 19-3) and the offense of Pedro Guerrero and Mike Marshall, who combined for 61 homers.

A few moments blemished the banner year. A players' strike in August halted the season for two days. In September, several players -- including Keith Hernandez and Dave Parker -- testified in court that they had used cocaine. And in their quest for money, the owners expanded the playoffs to a best-of-seven series.

St. Louis defeated the Dodgers in six games to win the National League pennant. Ozzie Smith was the hero of game five, hitting a bottom-of-the-ninth homer to give his club a 3-2 win. In game six, the big hit came from Jack Clark, as he blasted a ninth-inning, three-run homer off Tom Niedenfuer (who also gave up Smith's homer) to give the Cards a 7-5 win.

In the ALCS, Toronto won three of the first four games, but the Royals came back and won three straight, pitting them against cross-state rival St. Louis in the World Series.

The "I-70 Series" proved exciting. The strong pitching of John Tudor and Danny Cox put the favored Cards up two games to none. Frank White's three RBI, however, helped KC win game three. Tudor shut out KC in game four, and the Royals took game five 6-1.

KC trailed three games to two, and were trailing 1-0 in the ninth in game six. But the tide turned KC's way. Royal Jorge Orta led off the ninth with an infield single, which on video replay indicated a bad call by the umpire. Clark then misplayed a foul ball hit by Steve Balboni, and Balboni singled. A passed ball and an intentional walk loaded the bases, and Dane lorg singled to win the game 2-1, forcing game seven.

The Royals won the final game 11-0, knocking Tudor out after 21/3 innings. The victory gave the Royals their first World Championship.

Check out the next page for headlines and summaries of the 1985 baseball season's top stories.

When Winfield signed a multi-million-dollar contract in 1981, Yankee fans expected him to produce the numbers of Mickey Mantle and the drama of Reggie Jackson. When he fell below their expectations, they got on his case.

Dividing his 1985 season between the Indians and the Twins, Bert Blyleven spearheaded the American League in innings pitched (293-2/3) and strikeouts (206) while compiling a 17-16 record. He also topped the circuit in shutouts (five) and complete games (24).

Yielding a major league record 50 gopher balls in 1986, Blyleven helped the Twins to a World Championship in 1987. During the 1987 American League Championship Series, a Twins fan held up a banner that read, "Bert will have us home Blyleven."

Batting an American League-leading .368 average in 1985, Wade Boggs began a four-year streak atop the circuit in batting. He also led all circuit third basemen in chances that year with 486. Boggs was named to his first All-Star Game in 1985.

Tallying a .356 career average at the end of the 1988 season, Boggs tied with Joe Jackson for the third-highest mark in baseball history, behind Ty Cobb (.366) and Rogers Hornsby (.358).

Cal Ripken Jr. was the top American League All-Star vote-getter in 1985 (his third of seven consecutive years as an All-Star), as he continued to produce stellar numbers. The shortstop tallied a .282 batting average, 26 homers, and 110 RBI while leading the loop in putouts and double plays that season. His stature on and off the field made Ripken the most popular Oriole since Brooks Robinson.

One of the best fielding first basemen in baseball history, Keith Hernandez hit .309 in 1985, collecting ten homers and 91 RBI. Pete Rose, the all-time hit man, batted .264 with 107 hits and 60 runs scored that season.

In 1985, it was revealed that Hernandez was using drugs and he was suspended; he put his career back together to be named team captain in 1987. Rose is still rebuilding his gambling-tarnished reputation.

Fanning 16 batters in a 3-0 win over the Giants on August 20, 1985, Gooden became the first pitcher in the senior circuit to strike out 200 batters in each of his first two years. The 20-year-old won the 1985 American League Cy Young Award hands down.

At Riverfront Stadium on September 11, 1985, Pete Rose surpassed Ty Cobb as baseball's all-time leading hitter by stroking No. 4,193 off Eric Show, the starter for the Padres. To reach the milestone, Rose recorded over 100 hits a season past the age of 38. When asked to suggest his epitaph, Rose said, "Here lies the man who could hit forever."

In 1985, Henderson had one of the greatest seasons ever by a leadoff man: a .314 average, 99 walks, 146 runs scored (the best showing in the majors since 1949), and an average of over a run scored per game (the best since 1939). Despite all his heroics, he lost the loop's MVP Award to teammate Don Mattingly.

Dale Murphy continued his string of fabulous seasons in 1985, batting .300 with 111 RBI while leading the National League with 37 homers, 118 runs scored, and 90 walks. A seven-time All-Star selection and a five-time (consecutive) Gold Glove-winner, the Braves slugger received the 1985 Lou Gehrig Award for his generous off-field activities. On the downside, Murphy led the National League in strikeouts (141) for the third time in his

Below are more headlines from the 1985 baseball season, including a hitting milestone for Hall of Famer Rod Carew.

Nicknamed "Bulldog" by Dodgers manager Tommy Lasorda, Orel Hershiser made 1985 his breakthrough year. He spearheaded all National League pitchers in winning percentage at .864 as he went 19-3 and posted a 2.03 ERA for the season. In the League Championship Series, he won one game and hit .286.

Batting third in the Yankee lineup in 1985, Don Mattingly showed an increase in power as he amassed a career-high 35 homers and an American League-leading 145 RBI. The performance snared the 1985 American League MVP Award. Mattingly also displayed power at first base, winning his first of four consecutive Gold Gloves. In the mid-1980s, many considered him the game's best player.

In 1985, 38-year-old Darrell Evans led the American League in home runs with 40. Not was he the oldest home run champion in baseball history, he was also the only player ever to hit 40 or more homers in both leagues. Evans racked up 94 RBI, and was the only bright spot on the 1985 Tigers.

Willie McGee, the 1985 National League MVP, tallied the highest average by a switch-hitter in history, with a .353 mark. Leading the Cardinals to the senior circuit's pennant, the outfielder garnered a circuit-high 216 hits and 18 triples. In the 1985 World Series, he homered in game four to give the Cardinals their last win in the fall classic.

Vince Coleman captured 1985 National League Rookie of the Year honors , stealing 110 bases while scoring 107 runs. In his first seven years of professional baseball, Coleman led every league he had ever played in in stolen bases. He became the first player in baseball history to steal 100 in each of his first three seasons in the majors.

Coleman missed most of the 1985 postseason due to an injury (his foot got caught in an automatic tarp dispenser). He played in just three playoff games and stole just one base that year.

The most celebrated game in the career of Phil Niekro came on the final day of the 1985 season, when the 46-year-old won his 300th game as the Yankees defeated the Blue Jays. Niekro went 16-12 for the Yanks in 1985.

Said outfielder Bobby Murcer: "Trying to hit Phil Niekro is like trying to eat JELL-O® with chopsticks. Sometimes you might get a piece, but most of the time you get hungry."

In 1985, while Dwight Gooden was establishing himself as the best young pitcher in the National League, Bret Saberhagen was building a similar case for himself in the American League. The youngest pitcher ever to win the Cy Young Award, the 21-year-old Saberhagen went 20-6 with a 2.87 ERA. Stunning in the 1985 World Series, the righty won games three and seven and posted a 0.50 ERA.

Though fans were sad to see Carew leave the game, many sportswriters were glad to see him go. At times, he was downright nasty with reporters.

The Wizard of Oz, Ozzie Smith, hit the game-winning home run in the fifth contest of the National League Championship Series off Dodger reliever Tom Niedenfuer. The dinger was only the 14th round-tripper in the eight-year-old career of the switch-hitter. It was, moreover, his first homer hit lefthanded. Smith also collected a .435 average and three RBI in the tournament.

See the next page for highlights of the 1985 baseball season.

Check out the next page for more highlights of the 1985 baseball season.To learn more about baseball, see: 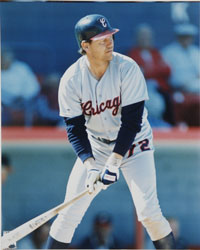 Carlton Fisk hit 37 home runs in 1985 -- more than any other catcher in American League history.

Below are more highlights of the 1985 baseball season, including Rookies of the Year, new records, and the year's inductees into the Hall of Fame.