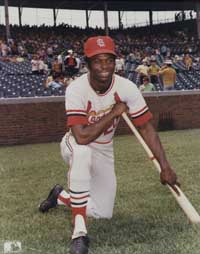 Lou Brock stole 938 bases -- more than any other player in history.

The Pittsburgh Pirates led the league in outfits during the 1979 baseball season. Their arsenal of uniforms was so vast -- black caps and yellow jerseys, yellow caps and white jerseys -- that they had 64 possible combinations at their disposal.

The Pirates' lineup of players was just as varied as their line of garb. They featured an outfielder who looked like a Pittsburgh Steelers linebacker (6' 5", 230-pound Dave Parker), and a pitcher who looked more like a placekicker (6' 4", 170-pound Kent Tekulve).

And, of course, the Pirates had Willie "Pops" Stargell, an inspiring presence at bat and in the clubhouse. The Pirates, whose theme song was "We Are Family," won the National League East by 2 games over Montreal.

The World Champion Yankees didn't even come close to repeating, as they lost two key players. Relief ace Goose Gossage was sidelined for two months by an injury he incurred in a fight with teammate Cliff Johnson. And catcher Thurman Munson was killed in an airplane crash in August.

Boston boasted a fearsome offense, as Fred Lynn and Jim Rice tied for second in the league in homers with 39. However, the pitching, hurt by the departure of Luis Tiant to the Yankees, was too weak to beat the Orioles.

The American League West was tight to the end, as four teams ranked within 6 games of first place. The California Angels, starring MVP Don Baylor (139 RBI), took their first division crown. The Twins, who finished 6 back, were pleasantly surprised by their off-season pickup of Jerry Koosman. Koosman, 11-35 in his previous two years with the Mets, won 20 games for the Twins.

The big news in the senior circuit was Pete Rose's preseason defection to the Philadelphia Phillies. His arrival did not promote the Phils to champs just yet, as they settled for fourth place.

The Rose-less Reds were still good enough to win the National League West. Though the Big Red Machine was losing its hitting punch, its pitching was as strong as ever -- Tom Seaver went 16-6. Cincinnati edged out the strong-armed Houston Astros, whose staff included Joe Niekro (21-11), J.R. Richard (313 strikeouts), and Ken Forsch (who pitched a no-hitter April 7 against the Expos).

The Orioles and the Bucs battled through a seven-game 1979 World Series. After losing the opener, Pittsburgh evened it up when Manny Sanguillen drove in Ed Ott with a ninth-inning single off Don Stanhouse. Baltimore won the next two games to go up three games to one, but the Pirates stormed back. They won the final three games -- 7-1, 4-0, 4-1 -- to take the 1979 World Series.

Find headlines and summaries of the major stories from the 1979 baseball season on the next page.

Willie Stargell led the motley Pirates to victory in the 1979 World Series. Here are some of the headlines from the 1979 baseball season:

In 1979, Larry Bowa established a major league record for highest career fielding percentage for a shortstop (1,000 or more games) with a .982 mark. He also set the single-season fielding mark at .991. Some critics, however, consider these marks to be tainted and claim that Bowa was helped by a generous official scorer in Philadelphia who rarely credited fielders with errors.

The leader of the Pirate "Fam-a-lee," Willie Stargell was an inspiration to his teammates both on and off the field. As team captain, Willie dispensed "Stargell Stars" to his teammates for great plays and key hits. Sharing 1979 National League MVP honors with Keith Hernandez, Stargell hit .281 with 32 home runs and 82 RBI. He was also named MVP in both the Championship Series and the World Series that season.

Baseball lost a fiery competitor, one destined for the Hall of Fame, when Thurman Munson died in the crash of his private jet in Canton, Ohio, on August 2, 1979. The Yankee captain/catcher was in his prime, having just turned 32 years of age. His 11-year career totals boast a .292 batting average, 113 home runs, and 701 RBI.

In 1979, Dave Kingman became known as the new "Mayor of Waveland Avenue" in honor of his National League-leading 48 home runs, many of which landed on front yards and door stoops in the Wrigleyville region of Chicago. Kingman's 115 RBI and loop-high .613 slugging average that year also earned him the nickname of "Kong." Kingman tied a major league record by smacking five homers in two consecutive games in 1979.

Although Ron Guidry didn't match in 1979 what he had accomplished the previous season, the cagey southpaw did sport a record of 18-8 while leading the American League with a 2.78 ERA. Guidry, who would continue on into the 1980s, could "bring it" with the best of them.

In the year that followed his fullest season (150 games in 1978), oft-injured Fred Lynn enjoyed his greatest performance. Leading the American League with a .333 batting average and a .637 slugging mark, he smacked 39 home runs and drove in 122 runs.

Continue to the next page for more headlines from the 1979 baseball season.

Below are more headlines for the 1979 baseball season, including Bruce Sutter's Cy Young Award and the retirement of Lou Brock.

Drafted by four ballclubs in three sports (baseball, basketball, and football) after his senior year at the University of Minnesota, Dave Winfield was a decade ahead of Bo Jackson in the versatility department. In 1979, Winfield hit .308 (for the second consecutive year) with 34 homers (third in the National League) and 118 RBI (tops in the circuit). The 12-time All-Star also led the loop with 333 total bases and came in fourth with a .558 slugging average that year.

In 1979, Bruce Sutter saved 37 games for the fifth-place Cubs and won his second consecutive All-Star Game, as he mastered what some considered at the time to be a spitter or a trick pitch. His efforts earned him the 1979 National League Cy Young Award. Sutter took the Cubs to arbitration that year, winning a $700,000 salary -- a staggering amount for that era.

Despite being viewed as the lesser of the two knuckleballing brothers, Joe Niekro fashioned a career year in 1979, winning 21 games to tie brother Phil Niekro for the lead in the National League. Unlike his older sibling, however, the Astro hurler lost just 11 games to yield a .656 winning percentage (second in the loop).

Don Baylor enjoyed his greatest season, winning the 1979 American League Most Valuable Player Award while leading the Angels to a West Division title. Batting .296 and smacking 36 homers that season, Groove headed the loop with 139 RBI and 120 runs scored.

Following an eight-year apprenticeship in the minors, Kent Tekulve emerged in the mid-1970s as the bullpen stopper for the Pirates. In 1979, the stork-like righty saved 31 games and set a World Series record by protecting the lead in games two, six, and seven of the fall classic.

Although his bat did most of his talking during his career, Willie Stargell was a better than average fielder who won more than a few of the stars on his cap for outstanding defensive play.

Lou Brock topped off his 19-year career with a .304 average and 21 stolen bases in 1979. While becoming the career leader in swipes (938), Brock stole 50 or more cushions for a record 12 consecutive seasons. At the plate and on the bases, he usually won the psychological battle against the pitcher.

Following in the footsteps of Mike Cuellar and Jim Palmer, Mike Flanagan in 1979 became the third Oriole pitcher to win the American League Cy Young Award. The lefty's 23-9 record led the loop and his five shutouts tied for first place that season. Traveling to the World Title in 1979, Flanagan won one game in both the Championship Series and the 1979 World Series.

Phil "Scrap Iron" Garner posted a solid regular season in 1979, batting .293 with 11 home runs and 59 RBI. It was in postseason action, however, that Garner hit full stride. He batted .417 in the National League Championship Series, finishing second on the Pirates. He went all out in the 1979 World Series, leading the team with a .500 batting average.

Find highlights from the 1979 baseball season on the next page.

See the next page for more highlights of the 1979 baseball season. 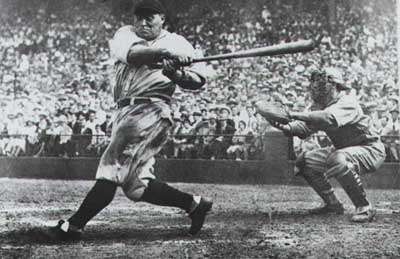 Below are more highlights from the 1979 baseball season, including George Brett's record-breaking year and an umpire strike: