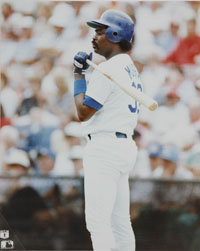 Eddie Murray won the American League Rookie of the Year Award in 1978.

In 1978, the internal strife of the Yankees came to a head, resulting in the forced resignation of Billy Martin. Here are some of the headlines from the 1978 baseball season:

Ron Guidry on a Rampage

Slick fielding, speed, and a .285 average helped Lou Whitaker win the 1978 American League Rookie of the Year Award, making him the first Tiger who wasn't a pitcher to win the title since Harvey Kuenn in 1953. "Sweet Lou," who debuted with Alan Trammell, continued to turn two with his pal until 1995. Whitaker became the team's best second baseman since Charlie Gehringer.

Amos Otis gave a dazzling performance in the 1978 American League Championship Series, leading his team with a .429 batting average. Otis also set the then-record of four stolen bases in a five-game playoff event. His post-season heroics capped a 1978 season in which he hit .298 with 22 homers and 96 RBI.

Billy Martin sealed his fate in July of 1978, while still at the Yankee helm, when he insulted owner George Steinbrenner and outfielder Reggie Jackson. Said Martin: "The two of them deserve each other: One's a born liar; the other's convicted." Martin was forced to resign shortly after making the remarks. He returned to the Yankees in July 1979.

As a sophomore in 1978, Murray was switched to first base, where he batted .285 with 27 homers and 95 RBI. The all-time home run king for the Orioles ranks among the all-time leaders in grandslams (he nailed at least one in each season from 1980-1986).

Bob Horner Is 1978 National League Rookie of the Year

Expectations for Bob Horner ran high in 1978. After signing with the Braves, Horner slugged his way to the 1978 National League Rookie of the Year Award. Smacking a dinger in his first game in the majors, he went on to tally 23 homers and 63 RBI in only 89 games. In the next two years, despite limited duty, Horner clubbed 68 homers. In 1987, he was playing the game in Japan.

In 1978, Dave Parker was made the leader of the team known as the "Pittsburgh Lumber Company." Parker followed on the heels of Roberto Clemente and Willie Stargell by winning the 1978 National League MVP Award with a .334 batting average, .585 slugging average, 30 homers, and 117 RBI. Parker achieved most of this success with a wired broken jaw which required him to wear a football-type helmet while at bat.

Find more headlines from the 1978 baseball season on the next page.