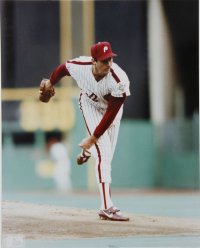 Steve Carlton won four Cy Young Awards throughout the course of his career.

During the 1976 baseball season, fireworks reigned as the United States celebrated its bicentennial and baseball's National League honored its 100th season.

The year also marked Marvin Miller's tenth anniversary as executive director of the Players Association. After the 1975 season, Miller went to bat for pitchers Andy Messersmith and Dave McNally, who were declared "free agents" by an arbitrator. The ruling so angered the owners that they locked the players out of spring training.

The season did begin on schedule -- thanks to the intervention of commissioner Bowie Kuhn -- but the sport of baseball had been irrevocably changed. Free agents became commonplace and baseball salaries skyrocketed.

Cincinnati led the National League in runs, batting, hits, doubles, triples, homers, steals, walks, on-base percentage, and slugging -- all by substantial margins. After a two-year hiatus, the Yankees returned to a renovated Yankee Stadium and played like the Bombers of old.

With Chris Chambliss, Willie Randolph, Graig Nettles, and Thurman Munson guarding the infield; speedster Mickey Rivers patrolling in center; and Sparky Lyle leading the American League with 23 saves, the Yanks finished first in the East, 10½ up on the Orioles.

The most talked-about bird in baseball was 21-year-old Mark Fidrych. Nicknamed "The Bird" (he resembled Big Bird on the TV show Sesame Street), the Tiger rookie went 19-9, sported an American League-best 2.34 ERA, and packed stadiums with his antics.

Kansas City's 23-year-old George Brett led the American League with a .333 average, winning a disputed batting title over teammate Hal McRae by one point. Brett won the crown on the last day of the season against Minnesota; he smacked one to outfielder Steve Brye, who seemed to deliberately misplay the ball, allowing Brett to get his needed hit.

The hit didn't affect the American League West standings, though, as Kansas City finished 2½ up on the second-place A's.

The Reds swept the Phils in the National League Championship Series in three games. The American League Championship Series, however, was a classic five-game series. Although KC's Brett hit a sizzling .444, the spotlight was on Chambliss, New York's first baseman. Chambliss hit .524 with eight RBI, including a homer in the bottom of the ninth of game five -- a shot fans still talk about.

The 1976 World Series, however, was a disappointment. Billy Martin's Yankees had little left against the powerful Big Red Machine, as the Reds won in four. Bench ripped the Yankees' pitching for a .533 average, making Cincinnati the first National League team since 1922 to repeat as World Series Champions.

Find headlines and summaries of the major stories of the 1976 baseball season on the next page.