In 1948, Stan Musial had one of the greatest seasons in baseball history, and the great Babe Ruth passed away. Here are some of the headlines from the 1948 baseball season:

Musial's 1948 baseball season ranks among the ten greatest in history (.376 average, 39 home runs, 131 RBI). What made it even more amazing was that, with the exception of Enos Slaughter, Musial got very little help from other Cardinals batters. On the mound, Harry Brecheen (20-7, 2.24 ERA) had a similar kind of year for the Redbirds.

Baseball fans, young and old, file past the bier of Ruth in the rotunda of Yankee Stadium on August 18, 1948, to say farewell to the greatest slugger in the game's history. Ruth died of throat cancer at the age of 53. At Ruth's burial, on a hot day, ex-teammate Joe Dugan whispered, "I'd give a lot for a cold beer about now," Waite Hoyt confided, "So would the Babe."

Ted Williams and Bobby Doerr combined with shortstop Vern Stephens to produce 81 home runs and 375 RBI for the Red Sox in 1948. The trio was largely responsible for Boston tallying 67 more runs than Cleveland, even though the Tribe both outhit and outhomered the Red Sox by a substantial margin.

Pat Seerey produced four home runs on July 18, 1948. Seerey, a 200-pound slugger with a 200-inch hole in his swing, was the American League whiff leader in every one of the four seasons that he played 100 or more games. Though he cracked four four-baggers in this game, he hit just 15 more during the rest of the season.

Cleveland Indians on-deck hitter Joe Gordon signals to Dale Mitchell that he can score standing up on Lou Boudreau's double. The tally was the Indians' first run in game four of the 1948 World Series, won by the Tribe 2-1 behind Steve Gromek. A record 81,897 attended the game; the next day, a new record of 86,288 was set.

Check out more headlines from the 1948 baseball season on the next page. 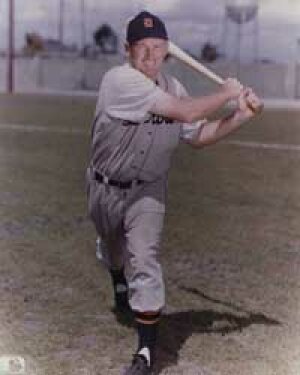