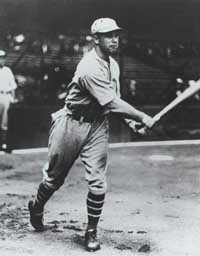 Jimmie Foxx, the A's first baseman, collected his second MVP Award at the age of 25.