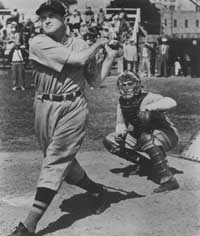 Joe Cronin, the Senators' manager and shortstop, led the American League in doubles (45).

At the start of the 1933 baseball season, the National League opened without John McGraw in uniform -- it was the first time in three decades. The fiery Giants manager had resigned 40 games into the 1932 campaign in favor of first baseman Bill Terry, who then rallied the last-place Giants to a sixth-place finish.

Terry continued his good work in 1933, building a new Giants pennant-winner around screwballer Carl Hubbell, Mel Ott, and imports Gus Mancuso (a catcher traded from St. Louis), leadoff man Jo-Jo Moore (up from the minors), and spark plug Blondy Ryan. Ott's 23 homers were third-best in the league, as were his 103 RBI. Terry himself was third in batting at .322.

The strong suit of the 91-61 Giants was pitching, as the MVP Hubbell and supporting cast members Hal Schumacher and Freddie Fitzsimmons compiled the National League's best team ERA of 2.71. Hubbell went 23-12 to lead the league in wins. His ERA of 1.66 was the lowest National League ERA since Pete Alexander's 1.55 in 1916.

Although Paul Waner scored the second-most runs and triples and the fourth-most doubles in the league, the Pirates came in five back at 87-67. Wally Berger carried Boston as far as fourth place on his 27 home runs and 106 RBI, both league second-bests.

Philadelphia's Chuck Klein won the Triple Crown, adding 120 RBI to his league-leading batting average of .368 and 28 home runs. Although Klein also spearheaded the circuit in hits (223) and doubles (44), and teammate Spud Davis had the second-best league batting average (.349), the Phillies couldn't rise above seventh.

While the fifth-place St. Louis club finished 91/2 games out, the Branch Rickey-inspired farm system was busy producing the building blocks of the famous "Gas House Gang" teams. Ripper Collins, who hit .310, and Joe "Ducky" Medwick, who had 40 doubles and 18 homers, were called up to replace Jim Bottomley and Chick Hafey; they joined veterans Pepper Martin, Frankie Frisch, and Leo Durocher to lead the National League in runs with 687.

Shortstop Joe Cronin managed a Washington team to the pennant by 7 games over a fading New York club in the American League. The Senators' attack consisted of Cronin (who led the league in doubles with 45), Heinie Manush (who was second in hitting at .336 and first in triples with 17), first baseman Joe Kuhel (who had 107 RBI), and veteran Goose Goslin (who banged out 55 extra-base hits).

Led by General Crowder at 24-15, Washington's pitchers allowed the fewest runs in the league (665); Earl Whitehill was third in wins with 22 and Monte Weaver was fifth in ERA at 3.26.

Ruth "slid" to 97 runs, 34 homers, and a .301 batting average in his second-to-last Yankee season, as New York used Ruth's momentum to lead the American League in runs with 927 and in homers with 144; Lou Gehrig was third in hitting at .334 and in homers with 32, second in RBI with 139, and first in runs with 138. Lefty Gomez helped on the pitching end with his league-high 163 strikeouts.

Check out the next page for some of the headlines from the 1933 baseball season.