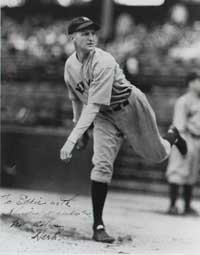 Herb Pennock was one of the few outstanding Yankees pitchers left for the 1928 baseball season.

The Yankees declined from being stratospheric to merely awesome during the 1928 baseball season and were surprised to find themselves with a good fight on their hands. The Bronx Bombers started strong and finished with a 101-53 record, but Connie Mack's resurgent Athletics put together a 25-8 stretch in July and caught the New York ballclub in September.

The 1928 A's were a talented mixture of youth and age, including the up-and-coming Al Simmons (who hit .351 with 107 RBI), Jimmie Foxx, and MVP catcher Mickey Cochrane, as well as dead-ball veterans Ty Cobb (who hit .323), Tris Speaker, and Eddie Collins. The Philadelphia lineup was rounded out by outfielder Bing Miller, who was fifth in batting at .329, and Max Bishop, who drew 97 walks and scored 104 runs.

The A's and Yanks met for a September 9 doubleheader showdown at Yankee Stadium, which was attended by a record crowd of 85,264. The Yankees swept, 3-0 and 7-3, and clinched the American League flag less than two weeks later. Philadelphia finished with a 98-55 record, 21/2 games out.

The National League race was another dogfight, as the 95-59 Cardinals outlasted an intrepid New York Giants team that won 25 games in September but came up two games short at 93-61. St. Louis slugger Jim Bottomley led the National League in triples with 20 and tied the Cubs' Hack Wilson for the home run lead with 31. The St. Louis lineup was fortified by young outfielders Chick Hafey, who hit .337 and belted 46 doubles and 27 homers, and Taylor Douthit, who drew 84 walks and scored 111 runs.

Playing for Boston, his third team in three seasons, the irascible Rogers Hornsby led the league in hitting at .387, on-base average at .498, and slugging at .632. Pittsburgh's Burleigh Grimes and New York's Larry Benton tied for the lead in wins with 25, and Brooklyn's Dazzy Vance took the ERA title at 2.09.

The Yankees dominated the 1928 World Series to an even greater degree than the year before, as they again swept 4-0. New York hitters scored 27 runs, 17 more than their pitchers allowed, and out-homered the Cardinals nine to one. To make their revenge for 1926 complete, the Yanks defeated Pete Alexander 9-3 in his only start. He recorded an ugly series ERA of 19.80.

Check out the next page for some of the headlines from the 1928 baseball season.