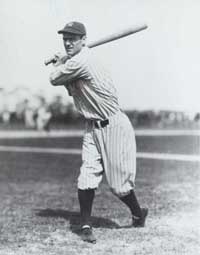 Earle Combs of the Yankees was third in runs, first in hits, and first in triples for the 1927 baseball season.

The 1927 baseball season was the one in which the home run era produced its greatest team -- the power-hitting New York Yankees -- but it opened with an unpleasant reminder of baseball's' corrupt pre-Ruthian past. Former pitcher Dutch Leonard accused Ty Cobb and Tris Speaker of fixing a 1919 game between Detroit and Cleveland. In spite of two incriminating letters produced by Leonard, commissioner Kenesaw Mountain Landis "permitted [Cobb and Speaker] to resign" from their clubs without any official finding of guilt or innocence. Both did resign, each signing with new teams for 1927 -- Cobb with Philadelphia and Speaker with Washington.

This mini-scandal resulted in the forced resignation of Ban Johnson from the American League presidency after 27 years of service, when he annoyed Landis by publicly protesting that his decision had smeared the two baseball legends without proof.

The public's attention was soon diverted, however, by the heroics of the 1927 Yankees, who led the American League on every day of the 1927 season and finished with a 110-44 record, 19 games ahead of a Cobb-led Philadelphia team. Babe Ruth hit 60 home runs, more than any other American League team, and led in on-base average at .487. His sidekick Lou Gehrig kept pace in homers until September, a month in which Ruth knocked an incredible 17; Gehrig finished with 47.

Ruth slugged .772 and Gehrig .765, both marks surpassed in history only by Ruth's 1920 and 1921 seasons, and between them Ruth and Gehrig accounted for almost 25 percent of the league's 439 home runs. Ruth was first in runs with 158, nine more than Gehrig, and second in RBI with 164, behind his teammate's 175. If Ruth had batted fourth and Gehrig third, these numbers may have been reversed.

Because of the idea left over from the Chalmers days that a man should not be voted MVP twice in his career, Ruth did not receive the American League prize. The MVP Award went instead to Gehrig, who won over Detroit's Harry Heilmann (a .398 hitter).

The rest of the New York order included leadoff great Earle Combs, who was third in runs with 137, first in hits with 231, and first in triples with 23; Bob Meusel, who hit 47 doubles; Mark Koenig, who scored 99 runs; and Tony Lazzeri, third in the American League in home runs with 18. This lineup scored a then-record 975 runs, slugged .489 (the best ever), and batted .307.

All this slugging overshadowed the Yankees' pitching, which compiled the American League's best ERA at 3.20. Waite Hoyt led in wins with 22; Wiley Moore, Hoyt, and Urban Shocker were first, second, and fourth in ERA at 2.28, 2.64, and 2.84; and four Yankees topped .700 in winning percentage. As a staff, New York also led the American League in shutouts, fewest hits, and fewest walks.

In the National League, Pittsburgh won a squeaker over St. Louis and the Giants, with the three teams separated by only 2 games. The Pirates were paced by the Waner brothers. Paul Waner won the batting title at .380 and led in RBI with 131, hits with 237, and triples with 17. Younger brother Lloyd Waner led in runs with 133 and was third in batting at .355.

Fired as manager and traded from St. Louis to New York, Rogers Hornsby rebounded to hit .361, second in the National League, with 26 home runs and 125 RBI. The fourth-place Cubs featured home run co-leader Hack Wilson and pitcher Charlie Root, who led in wins with 26 and innings pitched with 309. Pittsburgh's Ray Kremer won the ERA title at 2.47, and 40-year-old Pete Alexander mounted a comeback with the Cardinals to go 21-10 with the National League's second-best ERA of 2.52.

The 1927 World Series took only four days, as New York outscored the Pirates 23-10 and swept in four. Ruth batted .400 with two homers and seven RBI.

Check out the next page for some of the headlines from the 1927 baseball season.