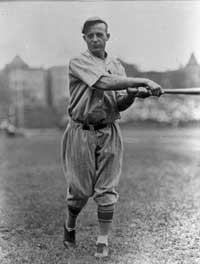 Jim Bottomley's hitting brought the Cardinals to the World Series during the 1926 baseball season.

Under new manager Rogers Hornsby, who had replaced Branch Rickey 38 games into the 1925 season, the Cardinals brought St. Louis its first pennant in a half-century of National League competition. It was the first St. Louis championship of any kind since the American Association St. Louis Browns had won in 1888.

Perhaps distracted by his off-field duties, Hornsby slipped to a .317 batting mark with 11 home runs, 96 runs, and 93 RBI. His team, though, scored a league-leading 817 runs. First baseman Sunny Jim Bottomley led the National League in doubles with 40 and RBI with 120, third baseman Les Bell drove in 100 runs and hit .325, and MVP catcher Bob O'Farrell hit .293 with 30 doubles.

Hornsby put together a durable starting rotation of Flint Rhem, who tied for the league lead in wins with 20; Bill Sherdel,

who finished 16-12; and veteran Jesse Haines, who went 13-4 with a 3.25 ERA. Cardinals pitchers combined for a National League-high 90 complete games. The bullpen was held up by 39-year-old ex-Cub Pete Alexander, who went 9-7 in a relief/spot-starting role.

In the American League, the Yankees returned to the top with a 91-63 record, 3 games better than Cleveland, but had to survive late-season scares from the Indians, A's, and Senators, who nearly overcame New York's 10-game lead in August.

Washington's Walter Johnson finally showed his age, going 15-16 in his last full year as a starting pitcher, and the rest of the staff collapsed around him to allow 761 runs, fourth-most in the American League. Washington's Sam Rice and Goose Goslin turned in excellent years, batting .337 and .354, and scoring 203 runs with 58 doubles and 29 triples between them.

Philadelphia had the American League's best pitching staff, including ERA winner Lefty Grove at 2.51; 12-4 junkballer Howard Ehmke; Rube Walberg; and Eddie Rommel, who was fourth in ERA at 3.08. And Cleveland's veteran first baseman George Burns won the MVP Award, hitting 64 doubles (second-most in history) along with 114 RBI and a .358 batting average.

In spite of Ruth's four-home run performance, the 1926 World Series went the full seven games and was decided when wily old Pete Alexander, who had already beaten the Yankees with complete-game efforts in games two and six, came out of the bullpen to protect Jesse Haines's 3-2 lead in the seventh. Alexander struck out rookie second baseman Tony Lazzeri with the bases loaded and two out, and shut down New York until he walked Ruth with two down in the ninth. A frustrated Ruth, who was walked 11 times by St. Louis pitching, tried to steal second, but was gunned down by O'Farrell to end the game and the Series.

Check out some of the headlines from the 1926 baseball season on the next page.

Although the St. Louis Cardinals won the 1926 National League pennant, the second-place Cleveland Indians had a notable season, too. Here are some of the headlines from the 1926 baseball season.

Due to the fact that in the 1920s, Most Valuable Player Awards could not be given to previous winners, it made a certain amount of sense to honor a member of the second-place Indians in 1926. It seems, however, that the wrong Indian was chosen. Although "Tioga George" Burns had a fine season (a .358 average, 114 RBI, and a league-leading 216 hits and 64 doubles), George Uhle turned in a better performance (27 wins, a 2.83 ERA, and 159 strikeouts).

The 1926 season was the last year as a productive starter for Carl Mays. Mays and Pete Donohue had a large hand in the Reds' second-place finish that year, just two games back of the Cardinals. Mays went 19-12 with a 3.14 ERA and a league-leading 24 complete games; Donohue went 20-14 with a 3.37 ERA in a league-high 286 innings, topping the circuit in wins and shutouts (five). The following year, Mays and Donohue won only nine games between them and the Reds fell into the second division, where they would remain until 1938. After 1926, Mays won just 14 more games in his career and was out of baseball by 1929.

After winning 26 games for the Baltimore team of the International League in 1924, Lefty Grove was sold to the A's for close to $100,000, a record at the time. He had a rocky sophomore season in 1926, turning in a .500 pitching performance despite heading the American League in both strikeouts (194) and ERA (2.51). When his control improved sharply the following season, he never again had a losing record.

Ted Lyons Bested by Only Uhle

Ted Lyons was most likely the American League's second-best pitcher in 1926, behind George Uhle of the Indians. As with most of the top hurlers during the 1920s and early 1930s -- Lefty Grove especially -- Lyons was used as both a starter and a reliever. Seventeen of his 260 career wins came in relief roles. Lyon's big moment in 1926 came on August 21, when he no-hit the Red Sox. Lyons made short work of the Bostonians, dusting them off in a mere one hour and seven minutes.

Learn about other 1926 baseball season headlines in the next section.

Following are more major headlines from the 1926 baseball season, including the 1926 World Series celebration in St. Louis.

Unable to gain a regular job in the Tigers' outfield the year before, Heinie Manush got his chance in 1926 when age and injuries reduced Ty Cobb to a part-time player and Al Wingo proved to be a flash in the pan. Manush's batting title that year (.378) was the high point in a career that was most notable for a .330 average but only a .377 on-base percentage.

According to the modern rule for determining batting leaders, Paul Waner and his .336 average would have seized the National League hitting crown in 1926 to become the first rookie since Pete Browning did so in 1882. Instead, he had to wait until the following year to bag his first official batting title. In 1927, Waner hit .380, the best mark of his career.

Other Babe Debuts in National League

Babe Herman was so promising a rookie in 1926 that he bumped Jack Fournier, the National League's former home run leader, off the Dodgers' first-base post. As a frosh, Herman topped the Bums in hitting (158), home runs (11), and RBI (81); he also had the poorest fielding average of any National League first baseman. When he had even more trouble at the initial hassock in 1927, he was moved to the outfield, where his errors were fewer, albeit more egregious.

The 1920s were golden years for baseball, and nowhere did they glisten as brightly as in New York. By the 1926 World Series, residents of the Big Apple had become accustomed to being part of mob scenes on an almost annual basis; in contrast, fans in St. Louis were taking part in their premier victory celebration since 1888, the first ever for a National or American League team. In time, the Cardinals would celebrate nine World Championships, more than any Major League Baseball team other than the Yankees.

Tommy Thevenow hit four home runs in the minors before taking possession of the Cardinals' shortstop post in 1926. After swatting two round-trippers during the regular season and an inside-the-park four-bagger in the 1926 World Series, he played 12 more years in the majors without ever hitting another circuit-clout.

Find highlights from the 1926 baseball season on the next page. 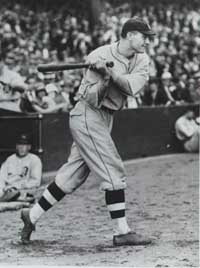 Following are even more highlights from the 1926 baseball season, including the release of Ty Cobb and Tris Speaker upon suspicion of betting on a game in 1919.