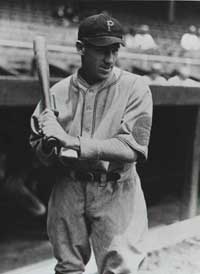 Kiki Cuyler helped the Pirates win the pennant for the 1925 baseball season, with 144 runs and 26 triples.

The New York Yankees found out just how dependent they were on the 30-year-old Babe Ruth during the 1925 baseball season. In spring training, their overweight and worn-down right fielder suffered an intestinal abscess brought on by too much eating and drinking. Stomach surgery and a suspension levied by manager Miller Huggins for insubordination limited Ruth's season to 98 games, and the Yankees collapsed to seventh place with a 69-85 record.

The good news for New York was that Huggins seized the opportunity to rebuild his aging team, replacing outfielder Whitey Witt with young Earle Combs, catcher Wally Schang with Benny Bengough, and first baseman Wally Pipp with rookie Lou Gehrig to form the foundation of the famous "Murderer's Row." Ironically, Gehrig started his famous consecutive-game streak on June 1, less than a month after Everett Scott's then-record 1,307-game streak ended. Scott had played shortstop every game from June 20, 1916, to May 5, 1925.

Washington, though, repeated in 1925, going 96-55 to finish 81/2 games ahead of a rebuilding Philadelphia A's team, which featured young slugger Al Simmons and rookies Mickey Cochrane and Lefty Grove. The Senators were a running team; Sam Rice and Goose Goslin were tied for second in stolen bases with 26 apiece, and Goslin hit a league-leading 20 triples. Rice and Goslin also scored a combined 227 runs and drove in 200. American League MVP shortstop Roger Peckinpaugh batted .294 and formed, with 28-year-old player/manager Bucky Harris, the team's double-play combo.

Key Washington acquisitions shored up the bench and the pitching staff, including first baseman/outfielder Joe Harris, who hit .323 with 12 homers in 100 games; Dutch Ruether, who went 18-7 after being released by Brooklyn; and ex-Indian Stan Coveleski, who matched Walter Johnson in victories with 20 and led the American League in ERA at 2.84.

Johnson, now age 37, slipped slightly to 20-7 with a 3.07 ERA. Rookie Grove surpassed him in strikeouts 116-108 to take the American League crown. Relief ace Firpo Marberry led the American League in games with 55 and saves with 15. Yankee Bob Meusel led the league in home runs with 33, and Detroit's Harry Heilmann barely beat out Tris Speaker for the batting title on the final day of the season, .393 to .389, with an exciting September charge.

In the National League, the Cincinnati Reds dominated nearly every pitching category and compiled a league-low 3.38 team ERA, an amazing accomplishment for the 1920s' biggest run-scoring year. Eppa Rixey and Pete Donohue each won 21 games, and Rixey, Donohue, and Dolf Luque combined for 879 innings pitched. The trio was also one, two, and three in ERA at 2.63 for Luque, 2.89 for Rixey, and 3.08 for Donohue.

The Cardinals boasted the National League's top hitter in Rogers Hornsby, who batted .403 and won a second Triple Crown. St. Louis, though, finished 18 games out of the money.

It was the Pittsburgh bats that made the big noise in 1925, as the Pirates won their first pennant since 1909 and became the first National League team to score 900 runs. Pittsburgh was led by Kiki Cuyler's league-topping 144 runs and 26 triples, Max Carey's National League-high 46 stolen bases, and third baseman Pie Traynor's 39 doubles and .320 batting average.

The Pirates won a seven-game 1925 World Series that was almost the reverse of 1924. Johnson won games one and four, only to lose the deciding contest 9-7; Peckinpaugh was a defensive disaster with eight total errors at short. One of the few Senators highlights was Rice's diving circus catch of Earl Smith's game three drive into the right-field stands.

Check out the next page for some of the headlines from the 1925 baseball season.