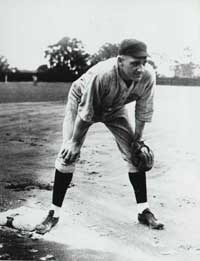 George Kelly was key to the Giants leading the National League in runs scored during the 1924 baseball season.

The big news during the 1924 baseball season was not what happened but what didn't happen. The New York Giants won again -- their fourth flag in four years -- but that was becoming routine. The Yankees, however, dropped to second place, 2 games behind the underdog Washington Senators, who had finished 231/2 games out only a year earlier.

It was the Yankees' pitching that faltered a bit, compiling an ERA of 3.86, second in the league. Joe Bush's 17-16 record and Bob Shawkey's 4.11 ERA offset good efforts from 21-game winner Herb Pennock, Waite Hoyt, and Sad Sam Jones.

But the deciding factor in the 1924 American League race was the pitching of Walter Johnson, who after 19 years finally played on a team that provided him decent offensive support. The 36-year-old dead-ball veteran led the American League in strikeouts with 158, wins with 23, shutouts with six, and ERA at 2.72. He was voted American League MVP.

Rounding out the rest of Washington's staff, which led the American League in ERA at 3.34, was lefty Tom Zachary, who went 15-9 with a 2.75 ERA; George Mogridge, who finished 16-11; and early relief ace Firpo Marberry, who recorded 15 saves. The Senators' offense included Hall of Fame outfielder Goose Goslin, who hit .344 with a league-leading 129 RBI; Sam Rice, who hit .334 and scored 106 runs; and first baseman Joe Judge, who batted .324.

The National League race also featured a surprise contender in Brooklyn, which rose from sixth place in 1923 to win 92 games in 1924. Brooklyn was sparked by hitting stars Jack Fournier, who was second in the National League in RBI with 116 and first in home runs with 27; and Zach Wheat, who hit .375, second only to Rogers Hornsby's .424. Brooklyn also featured the pitching duo of spitballer Burleigh Grimes and Dazzy Vance, who combined for 50 wins, 60 complete games, and 620 innings. Vance, who led the league with a 2.16 ERA, won the National League's first MVP Award.

While Hornsby -- with a league-leading 121 runs, 227 hits, 373 total bases, and 89 walks -- was turning in a fine year for sixth-place St. Louis, it was the New York Giants who led the National League in runs scored. The Giants were driven by George Kelly, who batted .324 and drove in a National League-high 136 runs, as well as Frankie Frisch and Ross Youngs. McGraw's team survived tough challenges from Brooklyn, 11/2 games back at 92-62, and Pittsburgh, which came in 3 games off the pace at 90-63.

The 1924 World Series between the Giants and Senators was an exciting seven-game contest that was one of the closest in history. Four of the games were decided by one run and two went into extra innings.

New York won game one on a Youngs single in the 12th. Washington won game two on a Roger Peckinpaugh double in the ninth. The two teams split the next four games, thus setting up a game-seven showdown.

Check out the next page for some of the headlines from the 1924 baseball season.

The biggest news of 1924 was probably that the Yankees didn't make it to the World Series. There were, however, other major headlines, including the ones below.

Jimmy O'Connell was the last major league player to be barred for either accepting or offering a bribe. His two-year career ended at the conclusion of the 1924 season. He contended that he solicited Phils shortstop Heinie Sand at the behest of several other Giants players, all of whom were exonerated by league commissioner Judge Kenesaw Mountain Landis. It was widely believed that O'Connell, a substitute, was only a convenient fall guy. Nevertheless, O'Connell was cut short of a promising career. In 1924, at the tender age of 23, he batted .317. In just 104 at-bats, he scored 24 times. Two years earlier, the Giants had paid $75,000 for O'Connell's services.

Hitting was the obsession of Rogers Hornsby, and for the five-year period between 1921 and 1925 his dedication paid off in a .402 composite batting average. His mark would have been even higher were it not for an illness in 1923 that held him to just 107 games and reduced his average to a "mere" .384. He came back in 1924 to take the batting crown with a .424 average, a post-1901 record in the National League.

Although Goose Goslin spearheaded the American League in 1924 with 129 RBI, he whacked just a dozen home runs. Not until 1952 would the American League again have an RBI leader who failed to finish among the loop's top five home run hitters (Al Rosen). In subsequent years, even though he played in mammoth Griffith Stadium, Goslin became one of the American League's more prolific sluggers, often finishing among the leaders in four-baggers.

Jim Bottomley: 12 RBI in One Day

One of the eyewitnesses to the record-shattering 12-RBI performance of Jim Bottomley on Sept. 16, 1924, was Dodger manager Wilbert Robinson, who held the one-game RBI record of 11. Bottomley started his onslaught against Dodger rookie Rube Ehrhardt, who had debuted with five straight wins before encountering Sunny Jim's hot bat.

Although it is safe to venture that Max Carey was the game's top base thief during the late 1910s and early 1920s, it is not so easy, in retrospect, to gauge his fielding prowess. On the evidence that is currently available, he would seem to have been one of the best, perhaps nearly the equal of Tris Speaker. In 1924, he led National League outfielders in chances accepted for the ninth time.

Find more headlines from the 1924 baseball season in the next section.

Following are some of the other big news stories in 1924, including details on a tour of Europe by the Giants and White Sox designed to introduce baseball to a new audience.

Travis Jackson hit just .074 and made three errors in the 1924 World Series, the first in which he appeared as the regular shortstop for the Giants. In the 12th inning of the finale, he bobbled an easy grounder by Walter Johnson that ought to have been Washington's third out, opening the door for Earl McNeely's pebble-struck hit that won it. Jackson, a Hall of Fame shortstop, was an absolute bomb in World Series play. Along with his critical errors, he batted .074 in the 1924 World Series. In the 1933 fall classic, he batted .222. And in the 1936 Series, Jackson hit a mere .190. In 19 career World Series games, he posted a .149 batting mark and a .164 slugging average.

John McGraw's last appearance, in the 1924 World Series, made him the only manager ever to lose two deciding World Series games in overtime. As in the 1912 loss to the Red Sox, the Giants lost on a misplayed pop foul that gave a Senators batter a second chance. McGraw won only three of the nine World Series in which he managed. He lost more Series games (28) than any manager in history.

The Giants and the White Sox embarked on a tour of Europe after the 1924 season to display the American pastime to an audience which, for the most part, had never before seen baseball played. Baseball couldn't have sent two more diverse teams to Europe. The Giants won the National League pennant in 1924, while the Sox finished in the American League basement.

Washington's Griffith Stadium was the American League site of the 1924 World Series. Despite its enormous dimensions -- the distance to the left-field foul pole was 350 feet -- the park seated just 27,410 attendees.

The Cardinals paid the Kansas City team of the American Association about $10,000 for Jesse Haines after he won 21 games for the club in 1919; in 1924, Haines no-hit the Braves on July 17 yet posted an 8-19 record for the season. Not until World War II would the Cards purchase another minor leaguer, as their farm system supplied them with all the talent they needed for a quarter of a century.

A standout defensive receiver and a solid hitter, Hank Gowdy was 35 years old in 1924 and had not been a regular backstopper for a number of years. Because Frank Snyder was ailing, Gowdy had to do yeoman duty in the 1924 World Series. He was catching his seventh game in as many days when his foot got tangled in his own mask on Muddy Ruel's pop foul. Gowdy's goof, along with an error by Travis Jackson and two bad-hop hits past Freddy Lindstrom, allowed Washington to win the decisive game 4-3 in 12 innings.

Find highlights of the 1924 baseball season on the next page. 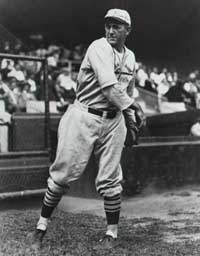