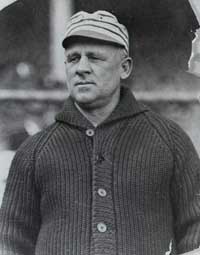 In 1923, the Giants-Yankees rivalry extended beyond the white lines of the baseball diamond. John McGraw's venerable National League club evicted the upstart Yankees from their newly renovated home park, the Polo Grounds, which the two teams had shared since 1913. The Yankees responded by building Yankee Stadium, a monumental state-of-the-art facility a short distance across the Harlem River in the Bronx. As luck would have it, both teams won their third straight pennants to meet again in October.

The Yankees had an easy time of it during the season, winning the American League flag by 16 games over the offensive-minded Detroit Tigers. Detroit featured Harry Heilmann, the batting champ at .403; Ty Cobb, who hit .340 and scored 103 runs; and first baseman Lu Blue, who drew 96 walks to score 100 runs on only a .284 batting average.

A half-game behind Detroit were the Cleveland Indians, the league's top scorers with 888 runs. They were paced by 35-year-old Tris Speaker, who posted 130 RBI (tied for league-best with Babe Ruth), 133 runs, and a .380 batting average (good for third place behind Ruth's .393). Cleveland spitballer Stan Coveleski took the ERA title at 2.76, and teammate George Uhle led in wins with 26 and innings pitched with 358. The St. Louis Browns fell from second place to fifth that season after an eye injury benched their ace, Gorgeous George Sisler.

Ruth regained his status as the American League's best hitter by leading in runs with 151, home runs with 41, slugging at .764, and on-base average at .545. He also drew 170 walks, the most by any batter until 2001. Ruth won the MVP Award over Chicago's Eddie Collins.

But contrary to their all-slugging image, the real strength of this Yankee team was pitching. Herb Pennock, another Red Sox refugee, went 19-6 for New York to lead the American League in winning percentage. Waite Hoyt was second in ERA at 3.01, and Sad Sam Jones led New York in victories with 21. The Yankees' 3.66 team ERA led all American League staffs.

It was the other New York team that led its league in runs scored, with 854, but the Giants' attack was more of a team effort. Ross Youngs batted .336 with a league-high 121 runs scored; Frankie Frisch was fifth in hitting at .348, scored 116 runs, and drove in 111; and Irish Meusel led the National League in RBI with 125.

Once again, New York beat out a strong-armed Cincinnati Reds team that compiled an ERA of 3.21, thanks largely to a career year from Dolf Luque, one of the first Cubans to star in the major leagues. He led the National League in wins with 27, shutouts with six, winning percentage at .771, and ERA at an incredible 1.93. In a year when two National League teams batted in the .290s, opponents hit only .235 off Luque.

Rogers Hornsby won the batting title at .384, beating out teammate Jim Bottomley at .371, but his heroics had no bearing on the pennant race. The Cardinals finished at 79-74, 16 games out. Cy Williams's league-leading 41 home runs mattered even less, as his Phillies lost 104 games and came in last.

Check out the next page for some of the headlines of the 1923 baseball season.