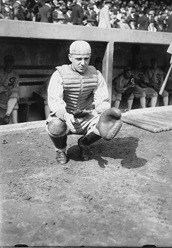 The trend toward runs and homers continued through the 1922 baseball season, particularly in the National League. Philadelphia and St. Louis became the first National League teams in this century to crack more than 100 home runs during the season; the Phillies hammered 116, St. Louis hit 107. The National League batted .292 to the American League's .285 and saw its overall ERA rise to a bloated 4.10.

Only one National League pitcher, Shufflin' Phil Douglas of the Giants, recorded an ERA under 3.00. Once again, spitballers led each league in ERA -- Douglas at 2.62 and White Sox Red Faber at 2.81 (though Douglas's ERA crown is disputed).

In both leagues, a host of sluggers crowded Babe Ruth for the limelight. In the American League, the St. Louis Browns' George Sisler won the batting title at .420 -- the third-best batting average of the century -- and also led the league in runs with 134, hits with 246, triples with 18, and even stolen bases with 51.

In the National League, Rogers Hornsby completed his adjustment to the home run era by producing the National League's first undisputed 20th-century Triple Crown (some historians say Heinie Zimmerman won the Triple Crown in 1912). Hornsby put together one of the greatest seasons in National League history, hitting .401 with 42 home runs and 152 RBI. He also banged out 250 hits and 46 doubles, slugged .722, and scored 141 runs. To top it off, Hornsby led National League second basemen in put-outs, double plays, and fielding average.

Ruth's season was ruined by a preseason run-in with new commissioner Kenesaw Mountain Landis. The two battled over the Babe's post-World Series barnstorming trip, which Landis had ruled illegal. Angry at being openly defied by the Yankees slugger, Landis suspended Ruth (and teammate Bob Meusel, who also made the trip) for the first month of the 1922 season. A pouting Ruth batted only .315 with 35 home runs in 110 games.

As a result of the partial loss of their two best hitters, the Yankees were outscored 867-758 by a Browns team that nipped at their heels all season and even took over the lead for a while in midsummer. Besides Sisler and Williams, St. Louis fielded Baby Doll Jacobson, who hit .317 with 16 triples, as well as the American League's best pitching staff, led by 24-game winner Urban Shocker.

Nevertheless, the Yankees edged the Browns by 1 game to repeat as pennant-winners. A big factor was the addition of several more former Red Sox, including 26-game winner Joe Bush, pitcher Sad Sam Jones, and shortstop Everett Scott. The Yankees' Wally Pipp batted .329 with 32 doubles and ten triples, and Whitey Witt scored 90 runs and led the American League in walks with 89.

The 1921 National League pennant-winners also repeated in 1922, as the Giants finished 7 games ahead of a Cincinnati team led by pitchers Eppa Rixey, who topped the National League in wins with 25, and Pete Donohue, who was third in ERA at 3.12.

In a rematch of the 1921 Subway Series -- this time under a best-of-seven format -- Ruth and the Yankees were thrashed again, managing only a game two 3-3 tie out of five games. Giants pitchers Jesse Barnes, Art Nehf, Hugh McQuillan, and Jack Scott completely shut down the Yankees, who scored only 11 runs in the five games. Irish Meusel knocked in seven runs for the Giants, while Ruth batted just .118 with no homers.

Check out the next page for some of the headlines from the 1922 baseball season.

Ken Williams ousted Babe Ruth from his throne as home run king in 1922 -- albeit temporarily. Find out more about this and other headlines from the 1922 baseball season below.

Charles Comiskey's uncharacteristic extravagance proved too little too late. In 1922, Comiskey's White Sox finished fifth, 17 games out. A year later, even their expensive new purchase, Willie Kamm, could not keep them from tumbling to seventh. In 1924, the Pale Hose landed in the basement for the first time in club history.

Ken Williams interrupted Babe Ruth's unchallenged reign as the American League slugging king in 1922, topping the league with 39 home runs (Ruth hit 35 dingers). On his home turf, Sportsman's Park, Williams was virtually unstoppable that year; on the road, he, as the rest of the Browns, had problems.

Max Carey was an ace basestealer in the 20 seasons of his major league career, though records are not available as to the number of times he was caught swiping. On what evidence there is, however, Carey was not only a prolific basestealer but an efficient one as well. In 1922, he stole 51 bases in 53 attempts.

Of the members of the Giants and Yankees dynasties of the 1920s who played at least ten seasons and had career batting averages above .300, all but two are in the Hall of Fame. Oddly, the two were siblings: Irish and Bob Meusel. Irish hit .331 with 132 RBI in 1922.

George Uhle's 22 wins and 4.08 ERA for Cleveland in 1922 were just one important measure of how different the game had suddenly become. Uhle became the first pitcher since 1897 to reach 20 wins while posting an ERA over 4.00.

Find highlights of the 1922 baseball season on the next page. 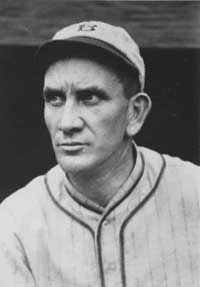 Following are more highlights of the 1922 baseball season, including a Supreme Court ruling that baseball is a sport -- not a business.