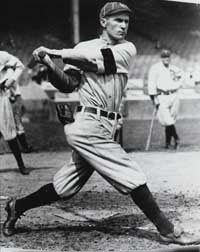 Dave Bancroft played for the Phillies and the Giants.

The 1915 baseball season brought major league fans another Boston-Philadelphia World Series. This time, it was the Boston Red Sox against a surprising Philadelphia Phillies team that jumped from sixth to first in one year.

Boston's strong-armed and deep pitching staff dominated the Phillies' batters in the 1915 World Series, holding slugger Gavvy Cravath to two hits and the entire lineup to a mere .182 batting average. The slick-fielding outfield duo of Harry Hooper (who hit .350) and Duffy Lewis (who drove in a team-high five runs) provided the punch for the Red Sox as Philadelphia fell, four games to one.

Kicking off the season with an 8-0 spurt, the Phillies fended off an early-season charge from a Chicago team that featured three of the National League's top four sluggers in Cy Williams, Wildfire Schulte, and Vic Saier. They combined for 36 home runs. Playing in brand-new Braves Field, Boston put on another late-season drive but worked no miracles to come in with a record of 83-69, 7 games back.

Philadelphia had the National League's best offense, thanks to career years from outfielder Cravath and first baseman Fred Luderus. Cravath set a new 20th-century major-league record for home runs with 24. He also led in runs with 89, RBI with 115, and bases on balls with 86; Luderus was second in the National League in hitting at .315 and second in doubles with 36.

Rookie shortstop Dave "Beauty" Bancroft captained the Phillies' defense and chipped in 85 runs and 77 bases on balls at the plate. Pete Alexander's 31-10 record and league-low 1.22 ERA led the league's best pitching staff, rounded out by 21-game winner Erskine Mayer, Al Demaree, and Eppa Rixey, to a team ERA of 2.17.

Pittsburgh's Max Carey led the league in stolen bases with 36, the second of his ten stolen base crowns. The last-place Giants' pitching continued to disintegrate; their only bright spot was Larry Doyle, who won a batting title at .320 and led the league in hits with 189 and doubles with 40.

The American League pennant race was a battle between Boston's arms and Detroit's bats, narrowly decided in favor of the Red Sox by 2-1/2 games. Five Boston starters reached double figures in wins, including righties Rube Foster (19-8) and Ernie Shore (19-8) and lefties Babe Ruth (18-8) and Dutch Leonard (15-7). Pitching out of the bullpen and in great pain, Smokey Joe Wood led the American League in winning percentage at .750 and ERA at 1.49, just ahead of 27-game winner Walter Johnson at 1.55. Shore was third in ERA at 1.64.

The Tigers nearly overcame a mediocre pitching staff spearheaded by Harry Coveleski and Hooks Dauss to score an American League high 778 runs. Bobby Veach and Sam Crawford tied for the RBI lead with 112. And as Veach swatted 40 doubles and Crawford 19 triples, Ty Cobb won another batting title at .369. Cobb combined 118 walks, a league-high 208 hits, and a new 20th-century record 96 stolen bases (broken in 1962 by Maury Wills) to score 144 runs, the best in the circuit.

Chicago won an exciting Federal League race in which 16 games separated the first- and seventh-place clubs. But with the baseball establishment sweating out an antitrust suit filed by the Federal League and the Fed backers nervous over their investments, the time came in 1915 for compromise and a return to the two-league system.

In a complicated settlement, some Federal League backers were bought out while others, such as Chicago's Charles Weeghman and St. Louis' Phil Ball, were allowed to purchase the existing major league franchises in their cities. A number of Federal League player contracts were auctioned off: The Giants paid $35,000 for Benny Kauff and the Yankees bought Lee Magee for $22,500, both of whom turned out to be disappointments. On an up note, the Federal League also produced the talented outfielder Edd Roush and manager Bill McKechnie.

Continue to the next page to see what made headlines during the 1915 baseball season.

Only the A's kept the Indians from a second consecutive cellar finish in 1915. The team was so desperate for cash to keep afloat that all it took was a reported $31,500 and three players -- only one of whom, Braggo Roth, ever helped the Cleveland club much -- for White Sox owner Charlie Comiskey to obtain Joe Jackson. Jackson turned in a .272 average and 36 RBI in 158 at-bats in Chicago in 1915. Jackson brought Commy's team two pennants (in 1917 and 1919) and everlasting infamy.

George Sisler spent most of his career with the Browns. His debut season in 1915 produced a .285 average, three home runs, and 29 RBI in 274 at-bats. By rights, however, he probably should have played for the Pirates, who came within a hair of having him declared their property in 1915. He would have plugged the first-base hole that had existed in Pittsburgh since 1905.

Eddie Plank won his 300th game in 1915, sporting the uniform of the Federal League St. Louis Terriers. Though 40 years old, Plank toyed with Federal League hitters, going 21-11 with a 2.08 ERA. He finished his career in 1917 with the St. Louis Browns after notching 326 victories. Plank's record for the most career wins by a southpaw endured until Warren Spahn of Milwaukee hurled the last victory of the 1962 season.

Jimmy Lavender Has Day in the Sun

Jimmy Lavender is one of a host of pitchers who have tossed no-hit games in the midst of otherwise nondescript careers. Lavender's no-hitter came on August 31, 1915, in a game with the Giants. As a rookie, Lavender showed considerable promise, winning 16 games in 1912 while working 252 innings. He never matched either figure again after that year, lasting only six seasons in the majors.

Continue to the next page to discover more highlights from the 1915 baseball season. 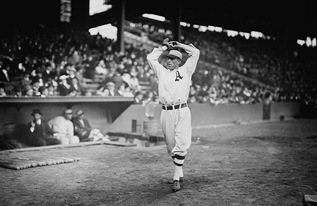 The 1915 baseball season was full of surprises -- from the Giants' last-place finish to the Braves taking the 1915 World Series in five games to Babe Ruth's first major-league homer. The Federal League pennant race was exciting but the league still floundered. Despite valiant effort to the contrary, 1915 marked the return to two leagues. You can read more highlights of the 1915 baseball season, below.

Continue to the next page to see even more highlights from the 1915 baseball season.

A surprising no-hitter and the first of what would be many Babe Ruth home runs to come added excitement to the 1915 baseball season. See additional highlights below: