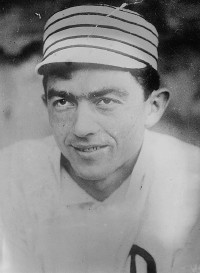 Both leagues used the lively, cork-centered ball throughout the 1911 season, bringing if not the end of the dead-ball era, then at least a holiday from it. Pitchers were put on the defensive as major league runs scored totals and batting averages shot up: the National League batted .260; the American League, .273. Two teams in the American League, Philadelphia and Detroit, batted over .290.

The New York Giants won the pennant, thanks to the league's best offense. Catcher Chief Meyers hit .332 and second baseman Larry Doyle slugged 25 triples (tied for fifth-best all-time) and scored 102 runs; John McGraw's team racked up 756 runs. All this run production didn't inhibit the Giants on the basepaths. Outfielder Josh Devore stole 61 bases, second in the league to Cincinnati's Bob Bescher with 81, and was followed on the leader board by teammates Fred Snodgrass at 51 and Fred Merkle at 49.

As a team, New York swiped a modern record 347 bases, 58 more than runner-up Cincinnati. The Giants also had the National League's best pitching staff, anchored by Christy Mathewson (who won 26 games and was the only National League pitcher with an ERA below 2.00 at 1.99) and Rube Marquard (who in his first full year in the rotation went 24-7).

The loss of Johnny Evers due to a nervous breakdown in May probably cost the Cubs the pennant, as they came in 7-1/2 games off the pace. Chicago's Wildfire Schulte won the National League Chalmers Award after tying with Pittsburgh's Chief Wilson for the lead in the league in RBI (107) and topping the circuit in home runs (21). Honus Wagner, age 37, won his final batting title at .334 for third-place Pittsburgh. Philadelphia, in fourth place, was buoyed by rookie sensation Pete Alexander. At 24 years of age, Alexander went 28-13 (with seven shutouts and a 2.57 ERA) to lead the NL in wins.

In the American League, Connie Mack's powerhouse repeated, but not without being given a run for its money by good-hit, no-pitch Detroit. Second to last in team ERA, the Tigers held first place for much of the first half of the season on the strength of the one-two punch of Ty Cobb and Sam Crawford, who were first and second in the American League in RBI with 127 and 115.

The death of pitching legend Addie Joss from meningitis provoked an outpouring of grief all over the baseball world. A 160-97 lifetime pitcher over nine seasons with perennial contender Cleveland, the popular Joss left a 1.89 career ERA, the second-lowest in history.

With the Giants hitters held to a puny .175 batting average in the 1911 World Series, Mathewson, Marquard, and the rest of the New York staff managed a pair of one-run victories in games one and five. They pitched just well enough to lose 3-1, 3-2, and 4-2 in games two, three, and four. The deciding blows were two game-winning home runs by Baker, one off each of the Giants aces, in games two and three. Baker collected two more hits in Chief Bender's 13-2, four-hit win in game six. For the Series, Baker batted .375 and led all hitters in runs with seven, RBI with five, and home runs with two.

To see what made headlines during the 1911 baseball season, continue to the next page.

The introduction of a livelier, cork-centered baseball definitely put some bounce in the 1911 baseball season. Here's a look at what made headlines during the year:

According to the rule for what constituted a rookie, Joe Jackson was not a yearling when he hit .408 in 1911, his first full season; by today's rule, however, he was. In any case, he still holds the record for the highest single-season batting average for the Nats, and he has both Cleveland and White Sox records for the highest career average.

Terry Turner Tops at 3B, SS

Prone to injuries and somewhat lacking in range, Terry Turner was not regarded as being in the same class as Honus Wagner, Nap Lajoie, Lee Tannehill, Bill Dahlen, and the other great fielding shortstops and second basemen of his day. But he was, without a doubt, one of the most versatile glove men and, arguably, the steadiest. For 17 years, he gave solid and sometimes brilliant service at whatever station he was put. In 1911, he held the season's fielding average records at both third base and shortstop.

Several of Ty Cobb's playing colleagues shared in his proud moment as he received the brand-new Chalmers automobile awarded him for being the American League's Most Valuable Player in 1911. Cobb led the majors that year in runs (147), hits (248), doubles (47), total bases (367), RBI (127), and batting and slugging averages (.420 and .621). Interestingly, and perhaps significantly, the players were all members of the Philadelphia A's.

Not many men who were 6'1" and weighed 200 pounds were used as leadoff batters in 1911; fewer still were deft at collecting walks; and only one could also steal bases by the bundle. Bob Bescher set a National League record in 1911 with his 81 thefts, a mark that stood until 1962. The following year, he established a modern Reds club record for runs (120) that lasted until 1956.

Walter Johnson Does It All

The first pitcher to win 20 games with a Washington American League team the previous year, Walter Johnson revealed additional evidence in 1911 that he would soon mature into a most extraordinary performer. That year, not only did he again win 25 games for the lowly Nats, his hitting improved to .234, whereupon he began to function as a pinch hitter.

To discover other highlights from the 1911 baseball season, see the next page. 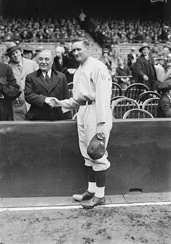