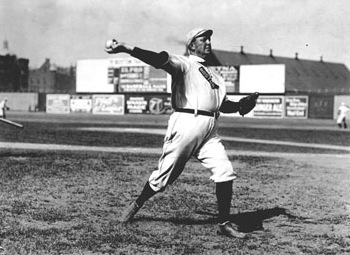 The 1908 baseball season was the biggest year for pitching in a decade of pitchers' years. Both leagues batted .239, both record lows. Only one of the 16 major league pitching staffs, the Yankees', had an ERA over 3.00. Seven pitchers threw no-hitters and seven of the all-time 50 lowest season ERAs came in 1908.

This wealth of pitching produced two of the closest, most exciting, and most controversial pennant races of all time. A three-team National League race among Chicago, Pittsburgh, and New York hinged on the still-talked-about Fred Merkle blunder, which occurred in a September 23 game between the Giants and the Cubs.

The score was tied 1-1 and the sun was setting over the Polo Grounds in New York. Fred Merkle, a rookie substitute, was standing on first and Moose McCormick occupied third with two outs in the bottom of the ninth, when Giants shortstop Al Bridwell singled to center.

Thinking the game was won, and with a crowd of happy fans swarming the infield, Merkle bypassed second base and made for the New York clubhouse. But Chicago second baseman Johnny Evers got the attention of the umpire who, after seeing Evers tag second base with a ball (there was some dispute over whether it was actually the game ball), declared Merkle forced out at second, nullifying the winning run.

This ignited a storm of protests, counter-protests, and league hearings. Finally, National League president Harry Pulliam ruled that the game would be replayed after the season if it proved to have a bearing on the pennant race.

Unfortunately for the Giants, it did. New York and Chicago finished in a tie, which was broken when Chicago's Three Finger Brown defeated Mathewson 4-2 in the make-up game. The Cubs finished with a 99-55 record, 1 game up on the Giants and Pirates, both at 98-56.

While the 1908 Cubs exhibited their usual combination of great pitching and team defense, the Giants were carried by Mathewson, who led the league in wins, games, complete games, strikeouts, and ERA. He threw a league-high 11 shutouts and recorded five saves, pitching in a dozen games out of the bullpen between starts.

Once again, Pittsburgh was the Honus Wagner show, as Wagner won his usual batting title at .354 and led in on-base average at .410 and slugging average at .542. He also made a clean sweep of six other key offensive categories: hits, RBI, doubles, triples, total bases, and stolen bases.

In the American League, a four-team race came down to the wire, with Detroit (90-63) finally slipping past Cleveland (90-64) by .004 percentage points, the smallest margin of victory in American League or National League history. Chicago finished 1-1/2 back and St. Louis faded late to end up 6-1/2 behind.

For the second straight year, Cobb's team was humiliated in the World Series, this time 4-1. Cubs batters hit .293 off Tigers pitching, while Brown's 0.00 ERA in 11 innings paced the Chicago staff to a 2.60 ERA. Cobb's personal performance improved, as he batted .368 with four RBI and a pair of stolen bases.

Continue to the next page to see headlines from the 1908 baseball season.

Ty Cobb won the American League batting crown in 1908 with a .324 average, a low figure even for that time. Sam Crawford was second with a .311 mark and Matty McIntyre came in three places behind him at .295 to make it a trio of Tigers that finished among the top five. Detroit's .264 team batting average led the league.

The other seven clubs hit a combined .236, which suddenly gives Cobb's circuit-topping figure quite a different look. Cobb's .324 average would be his lowest mark in the next 20 years. In 1928, his final season, he batted .323.

Nap Rucker's offensive support in 1908 included a trio of outfielders who hit .243, .216, and .195 -- and had just 74 RBI combined. Rucker, nevertheless, won 17 games. In 1916, when Brooklyn finally assembled enough hitters to go with its always-excellent pitchers and won the pennant, he was nearly through.

Hooks Wiltse an Odd Man Out

Hooks Wiltse was a very good pitcher -- he went 23-14 in 1908 with a 2.24 ERA and 118 strikeouts -- who happened to be on a team that, during his peak years, had a couple of great hurlers. The upside was that he got to play on five pennant-winning clubs. The downside was that with people like Christy Mathewson and Joe McGinnity around, he was always the odd man out whenever there was a big game to be pitched.

During most of his career, Roger Bresnahan would sometimes play other positions besides catcher; he was capable of playing them all, in fact. In 1908, though, he was stationed only behind the plate -- for 139 games, no less -- and it left its mark on him. He never again was a full-time player.

Not only did Crawford top the American League in home runs in 1908, he also set a new club record for the Tigers. He totaled seven four-baggers that year. Cobb swatted nine circuit clouts the following season to set a new team mark that endured until 1920, when Bobby Veach banged 11.

What makes Ed Reulbach's doubleheader win against Brooklyn on September 26, 1908, all the more extraordinary is that never during his career was he considered a workhorse. He seems in retrospect merely to have been a good pitcher -- at times, a very good hurler -- who on one particular day, with a pennant in the offing, was able to rise to greatness.

The 1908 season was the last in which Mathewson won 30 or more games. His 37 victories were one short of the number the Giants needed to claim the National League flag, as he was beaten by the Cubs on the last day of the season. His circuit-topping numbers included 34 complete games, 11 shutouts, five saves, 391 innings, 259 strikeouts, and a 1.43 ERA.

Find more highlights from the 1908 baseball season on the next page. 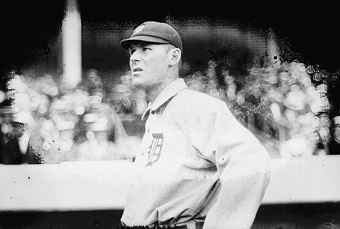 The amazing pitching performances of the 1908 baseball season -- and the low offensive statistics that resulted -- continued until the Cubs won the World Series, which would be their last for almost 100 years and counting. See more 1908 season highlights below: