When former Orioles shortstop Hughie Jennings took over from Bill Armour as manager of the Detroit Tigers, the first thing he did was insert the young Ty Cobb into the everyday lineup. This move helped the Tigers climb 21 games in the standings, from sixth place in 1906 to first in the 1907 baseball season.

With Cobb batting behind him in the cleanup slot, Sam Crawford hit .323 and slugged .460 (both second in the league to Cobb), scored an American League-high 102 runs, and banged out 34 doubles and 17 triples.

All summer long, Cobb drove in Crawford and lead-off man Davy Jones -- who was second in runs scored at 101 -- and the Detroit offense tallied 694 runs, 89 more than the also-ran Yankees' second-place total. Cobb himself drove in 119 runs, collected 212 hits, 283 total bases, and 49 stolen bases, all league-leading figures. He also led in batting at .350 and slugging at .468.

The defending champion White Sox posted almost the same numbers as in 1906, scoring the third-most runs in the league and allowing the fewest. But in the Year of Cobb, they could finish no higher than third. Washington finished in the cellar, but the Senators debuted a young fastball pitcher named Walter Johnson, who went 5-9 with a 1.86 ERA and 5.5 strikeouts per game.

The National League race could be summed up in one word: Chicago. Frank Chance's juggernaut fell off to a 107-45 record, 17 games in front of a Pittsburgh team that featured the National League's best offense; a resurgent Honus Wagner won his fifth batting title at .350 and also led the league in doubles (38), stolen bases (61), on-base average (.403), and slugging (.513).

With no hitters over .300, the Chicago attack slipped by more than a hundred runs, but the Cubs pitching continued its utter domination of National League hitters.

Led by Jack Pfiester's league-leading 1.15 ERA (the fifth-lowest in history) and Carl Lundgren's 1.17 ERA (the eighth-best ever), Chicago pitchers occupied four of the top five spots on the ERA leader board. Each member of the five-man staff compiled ERAs under 2.00 and the team allowed 390 runs, only nine more than in their 1906 tour de force.

The Phillies rode to third place in the National League as outfielder Sherry Magee led the National League with 85 RBIs and hurler Tully Sparks had a 22-8 record with a 2.00 ERA. New York slipped to fourth as age and years of overuse finally started to take its toll on Iron Man Joe McGinnity. He had an 18-18 record with an unusually high 3.16 ERA.

The 1907 World Series was a mismatch, with Detroit managing only a first-game 3-3 tie out of the five games played. For the remainder of the Series, the Tigers were held to three runs -- never more than one run in a single game -- as each of four Cubs starters went 1-0 and the staff posted a composite ERA of 0.75. Cobb and Crawford batted only .200 and .238 and managed only two extra-base hits between them.

But the biggest surprise of the Series was that Cobb was shut out on the basepaths by Chicago catcher Johnny Kling. Led by Jimmy Slagle's six stolen bases, the Cubs outstole the Tigers 16-6.

Find out what made news during the 1907 baseball season on the next page. 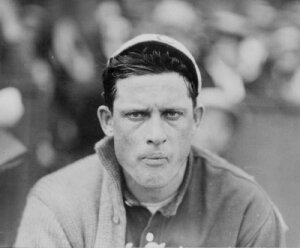