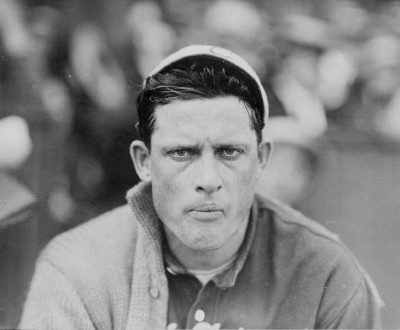 Ed Walsh pitched ten shutouts in 1906 -- more than any other pitcher in the American League. See more baseball seasons pictures.

The 1906 baseball season saw the first one-city World Series. Over the next 83 years, there would be 14 more -- 13 played in New York. But the 1906 World Series was the first, last, and only all-Chicago affair.

In early June, player/manager Frank Chance's Cubs kicked off the greatest National League dynasty of the 1900s by building a big lead over John McGraw's Giants and then coasting to a major league-record 116 wins against only 36 losses.

First baseman Chance led an offense that outscored the nearest team by 80 runs; he tied Honus Wagner for the league lead in both runs with 103 and on-base average at .406. Chance anchored the National League's tightest-fielding infield, made up of .327 hitter and RBI leader Harry Steinfeldt and the immortal double-play combination of Joe Tinker and Johnny Evers.

Up-and-coming star Frank "Wildfire" Schulte led the Cubs outfielders with 13 triples and four home runs, and Jimmy Sheckard banged out 27 doubles. Chicago pitchers allowed only 381 runs, 89 fewer than the nearest team, and turned in a 1.76 ERA.

Four of the five Cubs starters -- Three Finger Brown, Ed Reulbach, Jack Pfiester, and Orvie Overall -- had ERAs below 2.00, and Brown's ERA of 1.04 is the second-lowest in history.

The Cubs finished a mere 20 games ahead of the Giants, who won 96 games. The entire second division -- Brooklyn, Cincinnati, St. Louis, and Boston -- came in 50 or more games off the pace. Among the few offensive categories not dominated by Cubs were batting average, led by Wagner at .339, and slugging average, led by Brooklyn's Harry Lumley at .477.

Chicago's American League counterpart had a more difficult summer, as the White Sox wallowed in fourth place behind Philadelphia, New York, and Cleveland. Then in early August, the Sox reeled off an American League-record 19 straight victories to secure the pennant.

Unlike their crosstown rivals, the White Sox did not monopolize the offensive leader board, but their attack -- which produced 570 runs, third-most in the league -- hardly deserved its nickname, the "Hitless Wonders."

Chicago had no sluggers to compare with St. Louis' George Stone, the league leader in batting at .358 and slugging at .501, nor with Cleveland's Elmer Flick, who knocked 33 doubles and a league-high 22 triples.

But slugging was not the name of the game in the dead-ball era. Fielder Jones' Sox scratched out their runs by drawing walks (outfielders Jones and Ed Hahn were two and three in the American League in free passes) and working a running game (both second baseman Frank Isbell and first baseman Jiggs Donahue were in the Top Five in stolen bases).

Chicago's only big RBI man was shortstop George Davis, who drove in 80 runs, third in the league behind Nap Lajoie and Philadelphia slugger Harry Davis.

It was only in pitching where the White Sox could compete with the Cubs. But even with ace Doc White (who won the ERA title at 1.52) and Ed Walsh (the author of a league-leading ten shutouts), the American Leaguers went into the 1906 World Series as distinct underdogs.

Played in snowy October weather in Chicago, games one through four were understandably low-scoring. Nick Altrock beat the Cubs 2-1 in the opener, played in the Cubs' West Side Park, and Walsh won game three 3-0.

But going into the fifth game, the Series was tied 2-2. Then suddenly, the Hitless Wonders' bats caught fire, defeating Reulbach 8-6 and banging around both Brown and Overall to win the deciding game 8-3. The White Sox narrowly outhit their opponents, .198 to .196, but more than halved the mighty Cubs' ERA, 1.50 to 3.40.

Learn even more about highlights from the 1906 baseball season on the next page.

Unusual exploits and excellent Cubs pitching captured headlines during the 1906 baseball season. See an assortment of headlines below:

Jake Beckley remains a rather shadowy figure -- although he played 20 years in the majors and made 2,930 hits -- and this photograph only heightens the enigmatic tinge he possessed. He is shown wearing a St. Louis uniform despite the fact that he played for Pittsburgh the year the photo was taken (1888). In 1906, he was hired as an umpire for the National League.

Beginning in 1906, Three Finger Brown won 20 or more games for the Cubs for six consecutive years. He went 26-6 that year to post the highest winning percentage of his career (.813), and his nine shutouts and 1.04 ERA led the National League that season.

When Brown showed signs of slipping in 1912, the team rewarded him by trying to send him to the minors. Brown got a bit of revenge, though, when he helped the Chicago Whales win the Federal League pennant in 1915 while the Cubs finished below .500.

Harry McIntire's luck in 1906 typified that of most Brooklyn pitchers in the early years of the century: Not only was he defeated despite throwing a no-hitter, he also was a 20-game loser for the second season in a row. In 1908, another Brooklyn pitcher, Jim Pastorius, had a 2.44 ERA yet finished with a 4-20 record as the Brooks scored just 375 runs in 154 games.

Frank Chance holds both the season and career records for the most stolen bases by a first baseman -- 57 swipes in 1906, 401 thefts total. Given the added challenge of managing, he seemed only to improve as a player -- at least initially. The 1906 campaign, however, turned out to be the last in which he was able to perform to full capacity.

The match: Game three of the 1906 World Series. The place: West Side Park, then the home ground of the Cubs. On the mound for the Cubs is Jack Pfeister, a 3-0 loser that day to Ed Walsh of the White Sox, who threw a two-hitter to give the Sox a 2-1 lead in the Series. Walsh shut out the Cubs.

Find even more highlights from the 1906 baseball season on the next page.

Continue to the next page for still more highlights from baseball's 1906 season.

The highlights continued as the action-packed 1906 baseball season rolled on. Enjoy more highlights from the 1906 season below: