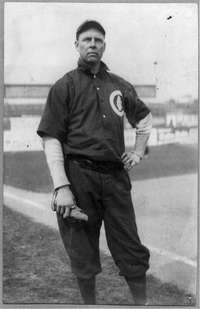 Mordecai Brown spent most of 1903, his rookie season, with St. Louis, where he went 9-13; he was playing for the Cubs at the start of the 1904 season. Brown lost most of his index finger in a childhood accident. Asked if his curve was aided by the truncated digit, he said that to be certain, he would have had to throw with a normal hand -- something he had never done. To this day, the Cubs have never won a World Series in which he didn't appear.

Deacon Phillippe became the Pirates' pitching ace in 1903, in pan by default when both Jack Chesbro and Jesse Tannehill, who won 48 games between them for the 1902 club, defected to the American League. Phiilippe ended his 25-9 season in with a trio of World Series wins. Control was his bread-and-butter, as Phillippe is the only starting pitcher in history to issue less than one walk for every game in which he appeared.

Wid Conroy's defection to New York in the American League forced the Pirates to put Honus Wagner at shortstop in 1903 and leave him there until his retirement 14 years later (Wagner won his second National League batting title with a .355 average that year). Even so, Wagner continued to play every other position except pitcher and catcher upon occasion; serving as a pitcher earlier in his career, he registered a perfect 0.00 ERA in eight innings.

The Huntington Grounds were the home of the 1903 Boston Pilgrims and the site of the first modern World Series game. The eight-game series spanned nearly two weeks. The players on both sides combined for 553 at-bats.

Most posed photographs of Joe McGinnity, for some reason, show him with his arm cocked and ready to deliver an overhand pitch rather than one of the sidearm slings that were his trademark. McGinnity made the world indelibly aware of his nickname "Iron Man" in 1903, winning three doubleheaders and working a National League-record 434 innings. McGinnity led the majors that year with 31 triumphs.

Featured on the front cover of the scorecard that was sold at the eighth and final game of the 1903 World Series were the contest's two preannounced starters, Bill Dinneen of Boston and Deacon Phillippe of Pittsburgh. They won a combined six of the eight games.

Find even more highlights from the 1903 baseball season on the next page.