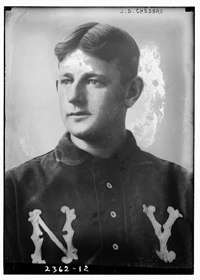 In 1902, Pitcher Jack Chesbro led the National League in wins with 28.

The war between the leagues was fought hard and ruthlessly during the 1902 baseball season, with the main battles taking place in Baltimore, Philadelphia, and St. Louis.

John McGraw's American League career was over almost before it started, as the old National League firebrand and king of the umpire-baiters clashed repeatedly with Ban Johnson over rowdy behavior on the field. In 1901, Johnson had infuriated McGraw by suspending him for verbal abuse of an umpire. By early 1902, McGraw was beginning to feel like a marked man.

In April, McGraw was treated with a little of his own medicine by umpire Jack Sheridan, who watched as Boston's Big Bill Dinneen hit McGraw five times with pitches. Each time, Sheridan refused to award him first base on the grounds that McGraw had gotten hit intentionally.

Finally, Sheridan added insult to literal injury by ejecting McGraw from the game. The league backed its umpire and suspended McGraw for five more days.

McGraw got even with Johnson later in the season. McGraw enlisted two National League owners to secretly buy up a controlling interest in the Orioles' stock and then release virtually the entire lineup -- including Joe Kelley, Roger Bresnahan, and Joe McGinnity -- to the New York Giants and the Cincinnati Reds.

Shortly afterward, McGraw was named the Giants' manager. An irate Johnson took control of the Baltimore franchise and, a year later, moved it into New York to compete with McGraw's Giants. The franchise was renamed the "Highlanders" and, later, the "Yankees."

In Philadelphia, the battleground moved from the boardroom to the courts, as the Phillies obtained a ruling from a Pennsylvania judge that Athletics star Napoleon Lajoie be returned to his former National League club. A's manager Connie Mack undid the National League's strategy by transferring him to Cleveland.

Lajoie remained with the Cleveland team, which was christened the "Naps" in his honor, for a dozen years and continued to be an important American League drawing card. However, he had to avoid the jurisdiction of the Pennsylvania courts by skipping Cleveland's away series in Philadelphia for the remainder of the 1902 season.

Spurred by successes in Chicago, Philadelphia, and Boston, the American League moved its Milwaukee franchise into another National League market, St. Louis. The new team promptly raided the St. Louis Cardinals' roster for most of its stars, including Jesse Burkett, Bobby Wallace, and Jack Powell.

Another blow to the National League was the defection of slugger Big Ed Delahanty from Philadelphia to Washington, where he won the American League batting title at .376 and led in slugging average at .590.

In the National League, Pittsburgh repeated and won a then-National League-record 103 games against 36 losses. The Pirates made a clean sweep of virtually every major offensive and defensive category.

Ginger Beaumont won the batting title at .357; Jack Chesbro led in wins with 28 and winning percentage at .824; Honus Wagner led in runs with 105, RBI with 91, doubles with 30, stolen bases with 42, and slugging average at .463; and Tommy Leach led the league in triples with 22 and homers with six.

Chicago's Jack Taylor turned in a 1.33 ERA, and in an historic iron-man season, Boston's Vic Willis started 46 games (the sixth-most in the 20th century), completed 45 (second-best), and threw 410 innings, the fifth-best ever.

Check out what made news during the 1902 baseball season on the next page. 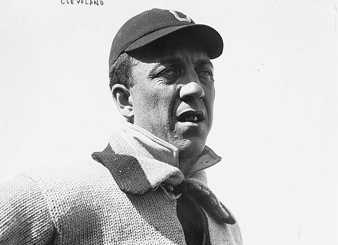