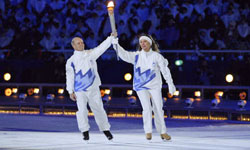 Dorothy and Ernest Hamilton adopted Scott in 1958 when he was just six weeks old. In 1984, Hamilton won an Olympic gold medal in men's figure skating, making him the first American male to medal in the sport since 1960. These days, Hamilton produces Stars on Ice, a professional ice show that tours cities around the world.