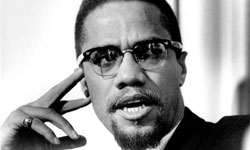 Malcom X was put into an orphanage after his father died and his mother was admitted to a mental hospital.
Photo by Michael Ochs Archives/Getty Images

The childhood of the man who would become "black power" leader Malcolm X was not a happy one. His father, Earl Little, was a Christian minister who was killed in 1931 when Malcolm was a small boy. Following his father's death, his mother had a nervous breakdown and was committed to a mental hospital. Malcolm and his siblings were put into an orphanage and later fostered by various families. Malcolm X would later convert to the Nation of Islam and emerge as one of the most influential civil rights activists of the modern era.