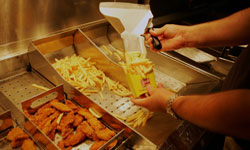 Wendy's founder Dave Thomas was given up for adoption at birth.
Joe Raedle/Getty Images

Dave Thomas, the founder of fast-food restaurant giant Wendy's, was given up for adoption at birth. Sadly, his adoptive mother died when he was five. Thomas left high school in the tenth grade to work full-time at a restaurant. After a stint in the army, Thomas moved to Columbus, Ohio, where he opened his first Wendy's restaurant in 1969. He would later found the Dave Thomas Foundation for Adoption to promote adoption law simplification and reduce adoption costs in the United States.