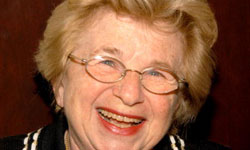 Dr. Ruth was sent away as a child to be protected from the Nazis.
Photo by Stephen Lovekin/FilmMagic/Getty Images

Everyone's favorite sex therapist was born Karola Ruth Siegel in Frankfurt, Germany, in 1928. Siegel was put on a train when she was ten years old and sent away from home to avoid Hitler's Nazis. Her mother and grandmother told her she was going off to school, but in reality Siegel was sent to an orphanage where she remained for many years. Dr. Ruth would go on to study at the Sorbonne in Paris and reached household name status with her radio program, Sexually Speaking, which aired during the 1980s.