How to Play the 12-bar Blues

Browse the article How to Play the 12-bar Blues 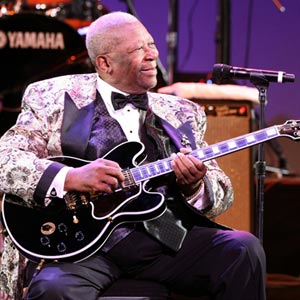 Everyone knows why B.B. King sings the blues, but unless you know your way around a guitar, you probably don't know how he plays them. It all starts with something called the 12-bar blues. Almost all blues songs are written in this progressive scale, which mimics the call and response vocal tradition of African-American slaves in the Deep South.

­When W.C. Handy created the first certifiable blues hit, he used the 12-bar blues. Released to the public in 1914,­ "St. Louis Blues" was initially met with a lukewarm respons­e [source: Morgan]. By the 1930s, however, people all over the country could identify with the genre's theme, regardless of race. African-American artists such as Billie Holiday substantially changed popular culture and helped the blues become a permanent part of the American musical landscape. In the latter half of the 20th century, B.B. King pioneered the role of the lead guitar player and used the 12-bar blues in new and unique ways. He, along with other blues artists, helped transform the genre from an American movement into a global musical phenomenon.

­Today, the 12-bar blues is one of the most basic and essential chord progressions in any guitar player's repertoire. If you are a novice player, or would just like to freshen up on the basics, this instructional series from iVideosongs is a great place to start. You probably won't be ready to pen the next "The Thrill Is Gone" after watching, but learning this technique will undoubtedly help you become a better player.

Whether they want to rock like Hendrix or wail like B.B. King, most guitar players learn the 12-bar blues shortly after they first pick up the instrument. Since 12-bar blues scales are frequently used in rock, blues and jazz, mastering these simple chord progressions is a must for any serious guitar player.

­The 12-bar blues is broken up into three sequential measures (or bars), each of which contains fo­ur beats. This video will teach you how to play the first measure, an A chord, using Elvis Presley's "Ho­und Dog" as an example. After you've mastered this technique, check out the video on the next page to learn how the second measure is played.

Now that you know the 12-bar blues has nothing to do with alcoholism or depression, it's time to learn how to play the second measure. You're still working on a 4/4 time signature, so each quarter measure is a single beat. However, the second measure is played in a D chord, as opposed to the A of the first.

This video will show you how to play the second measure and once again uses Elvis Presley's version of "Hound Dog" to demonstrate proper usage and technique. But you're not done yet. Learn how to play the third and final measure of the 12-bar blues by watching the vid­eo on the next page.

The third measure of the 12-bar blues is identical to the first two, except it's played in an E chord. Like the clips on the last two pages, this video provides a detailed explanation and demonstration of the steps used to play this measure. You'll also learn how to combine the first and second measures with the third. Elvis Presley's "Hound Dog" is used to demonstrate the versatility that the 12-bar blues offers to both skilled musicians and novice guitar players. Now that you've mastered the 12-bar blues, take your expertise to the next level by following the links on the next page.