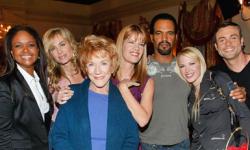 The cast of The Young and the Restless celebrate their soap staying the number one rated daytime drama series for twenty years straight.
Photo by Michael Buckner/Getty Images

The Young and the Restless took to the small screen on March 26, 1973, and more than 10,000 episodes later, it shows no signs of letting up. Home for Y&R characters is Genoa City, Wisconsin, a fictional version of a real village. The TV town is a hotbed of corporate intrigue and grandeur, pitting two wealthy families -- the Newmans and the Abbotts -- against each other.

One of Y&R's most outrageous characters, Sheila Carter Grainger Forrester Warwick (Kimberlin Brown) has switched babies, tried to burn her own mother alive, used paternity results as blackmail, shot people, lived in a mental institution, and escaped from a mental institution by convincing someone to have plastic surgery and take her place. She is currently presumed dead, but in soap world that means nothing -- look for her to menace again! With story lines like that, it's no wonder that Y&R has held the top spot in the ratings war since 1988.