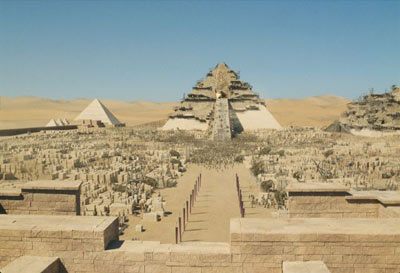 An Egyptian city in the middle of the Namibian desert
Photo courtesy Warner Bros.

Roland Emmerich originally planned to shoot the movie almost entirely in Africa but ran into some red tape there. On a scouting trip to New Zealand, however, he discovered the perfect location and decided to shoot more of the film there. But it wasn't exactly easy. "The mountains of New Zealand are much colder, and we had not planned costumes for that," he says. "We had our people running around half-naked. They were freezing."

He should have had a clue about what was to come when he chose a New Zealand spot called Snow Farm. "They said 'Snow in May doesn't stay,' but it did," Emmerich says. "I had to rewrite the script." And the weather issues didn't stop there -- rain delays were the culprit in Capetown, South Africa, and fog screwed up operations in Namibia.

While he won't get specific, Emmerich admits to going slightly over time and budget, which somewhat irks the usually punctual director. But it didn't get him into trouble with Warner Bros. "They were amazed that we didn't go over more," he says. "They were glad I found creative solutions."

One of his ingenious ideas involved the proto-Egyptian city that the crew erected in the Namibian desert, along with a 16-foot-high model replica the size of a soccer field. Helicopter shots of the city were replicated on the model with a Spydercam (a remote-control camera), and CG people and mammoths were added later. "You usually don't want to have models outside because all kinds of things can happen … but it worked out fine," Emmerich says.

Emmerich relished these and all the challenges of making "10,000 BC," believing that big, complicated blockbusters are what he was meant to do. "Little movies -- so many people can do that. It's not a challenge for me," he says. "I like to dream of big things. And they get bigger because I get better at it."

To learn more about "10,000 BC" and movie special effects, take a look at the links below.

The design of the city and the model came from a book by a French architect who figured out a way to build the pyramids at Giza. "Our production designer, John-Vincent Puzos, found it and bought the rights," Emmerich says. The miniature version of the set was built in Munich, Germany, and shipped to Namibia.