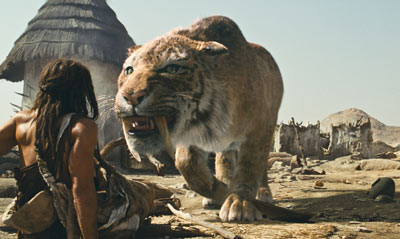 Is the actor in this scene real or computer-generated?
Photo courtesy Warner Bros.

Besides the creature work by MPC and Double Negative, there was additional CG for crowds, backgrounds, flying arrows, sky shots and a Nile River sequence. They also created a digital lead actor. "MPC did some really believable Steven Straits, where he's running among the mammoths," Karen Goulekas says. "He [takes up] more than a third of the screen and he looks totally photo-real."

Otherwise, it was a case of actual humans interacting with CG creatures, which posed a different sort of challenge for the actors and filmmakers. "As the director, you're sometimes the only one that knows what you're shooting -- not even the cameraman knows," Emmerich says. "You're always saying, 'Trust me.'"

Acting opposite things that aren't there requires a certain amount of imagination. But it's technical information -- like spatial references and eye lines -- that makes it convincing, and provisions were made for that on location. The actors watched "previsualization" footage of the creatures in the scene, and they used an 18-foot stick to imagine the proportions of a mammoth.

For a scene that involved a saber-tooth tiger trapped in a pit, Goulekas had special effects supervisor Dom Tuohy build a blue-foam facsimile and place it under branches and logs. For a terror birds sequence, "We had guys in blue suits with sticks and real-size terror bird heads on them that the actors could smash with their spears as they were fighting," she says. "Of course, later it was all [digitally] painted out."

Another sequence depicting four mammoths dragging giant blocks up a ramp sparked a different creative solution. "We had to make sure that the extras didn't walk through this probably 20-foot-wide area where the mammoths would be, so we stretched out blue netting material in the shape of a mammoth and put it on a circular base," Goulekas says. "There were crazy props all over the place."

Goulekas had a team of "data wranglers" on set during production. They kept busy getting camera angles, lens measurements and markers for the effects shots. "It's not like in the studio, where you put your marks up on the blue screen and you're done," she says. "We were constantly putting up and taking down markers. We'd put people's boyfriends and girlfriends to work when they visited the set."

Throughout production, the wranglers continuously gathered data, "photographing costumes, actors in costume, the environment, the sets, you name it," she says.

Changing weather conditions also came into play. "There were a lot of shots where we had to add or remove snow to match other shots," Goulekas says. "And you always [have to] change skies -- that's a given when you shoot outdoors."

But not every problem could be fixed digitally. Only 5 percent of "10,000 BC" was shot indoors, so the production often battled Mother Nature -- and lost.

Emmerich's next project, "2012," about a series of natural disasters that bring on the end of the world, is due out in July 2009. He also confirms that he’s attached to a remake of "Fantastic Voyage." But he might first do another film based on a screenplay he wrote, which he says could be the biggest thing he's ever done. He describes it as “a mix between ‘Day After Tomorrow’ and 'Independence Day,’" set in the present.